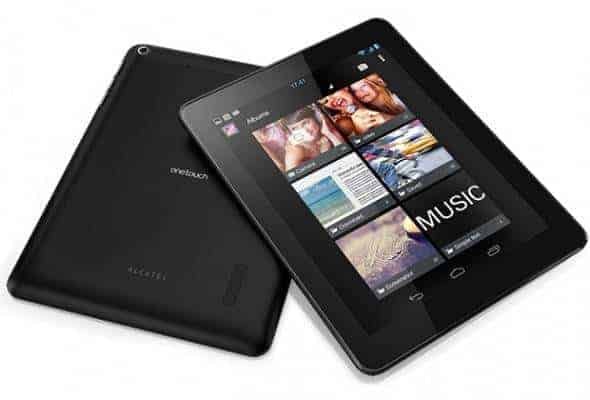 Here it is folks, the beginning of the deluge of Android-based devices to come out of this year's CES in Las Vegas. First up it would seem, is Alcatel and their One Touch line of tablets. While definitely not a name you'd expect to hear putting Android tablets out into the market, these offerings don't look too bad. Some of you out there may remember the Alcatel naming from the 90s as a brand of cell phone. Now, the brand lives on but the company behind Alcatel is no longer the same, a company called TCL bought rights to the name and are hoping to bring it out of retirement with the help of Android.

The One Touch line of tablets is going straight for the win when it comes to pricing, and starting at just $129 it looks like it's going to have a good chance. There's not going to be any cellular connectivity when it comes to these new slates as it's strictly WiFi but, there's more to them than just their pricing. Let's run through the group:

Filling out the middle pricing of the line-up is the One Touch Tab 7 HD and at just $149 there's a lot on offer for that price. As the name would suggest there is an HD IPS panel taking front show with its 1280 x 800 display and a dual-core 1.6 Ghz CPU with 1GB of RAM coming along for the ride. Bizarrely, there is another tablet in the line-up that is similar to this one, the One Touch Tab 8 HD comes in at 8-inches with a very un-HD resolution of 1024 x 768. Perhaps more confusing than anything is that this version is actually more expensive at $179. Both tablets share 8GB of internal storage, support for a microSD card and 2MP cameras at the rear with VGA front-facing snappers. Both of these come with a relatively stock build of Android 4.1.

The lowest end of the bunch is what will get you that attractive price-tag of just $129 but, it's also the least favorable of the bunch. With a resolution of 1024 x 600 occupying its 7-inch display and 1GB RAM with a 1Ghz single-core CPU, there's not too much to write home about. Storage is slashed as well, starting at just 4GB but, the microSD card slot of its bigger brothers is still here. As with the One Touch Tab 7 and 8 HD this lower-end offering still retains Android 4.1.

To Alcatel's credit, these tablets come with some impressive specs considering their price tags and with the inclusion of expandable storage and IPS displays, there's a lot to love about these budget-minded tablets.