Ever since the original Galaxy S launched with Samsung’s in house hummingbird Cortex-A8 SoC the Android performance crown was in their court. Competing with the likes of Qualcomm and Texas Instruments at the time, while also providing Apple with the custom SoC used in the iPhone. Fast forward to 2012 and Samsung releases their quad-core Exynos 4412 Cortex A9 and continue to lead the rest in performance.

The ARM Cortex A15 the architecture provides for faster, lower latency chips, that also use less juice. It seems like we have been waiting a while for someone to come out with a A15 chip and Samsung has come to the table first with their dual core 1.7GHz Exynos 5250 that is powering the new Chromebook Series 3 and Nexus 10 tablet. The chip is pushing the super high (2560 x 1600) resolution on the Nexus 10 around with impressive speed and that is only in its dual core form. 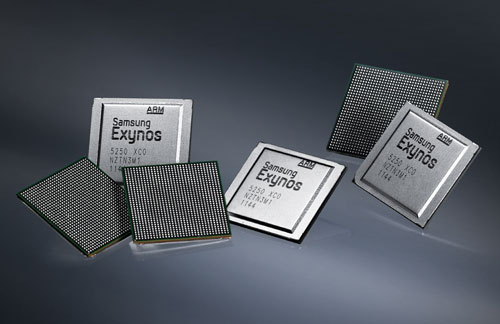 The Exynos 5440 has now been referenced on Samsung’s kernel Git page confirming that a quad core version of the current chip is coming down the pipeline. More than likely Samsung will use their new SoC to power the upcoming Galaxy S IV flagship  to be released next year.

The Exynos 5440 and the rumored 4.99″ 1080p full HD display are the only stats we have so far on the upcoming superphone from Samsung. Other specs have been speculated such as the 13mp camera while RAM and other info has yet to be released. Whatever the case happens to be Samsung is not one to be behind in the hardware department and they certainly show no signs of slowing with 2012 being their most successful year to date in terms of smartphone sales.

Do you expect Samsung to keep the performance crown next year or will they be upset by chips from Nvidia or Intel?