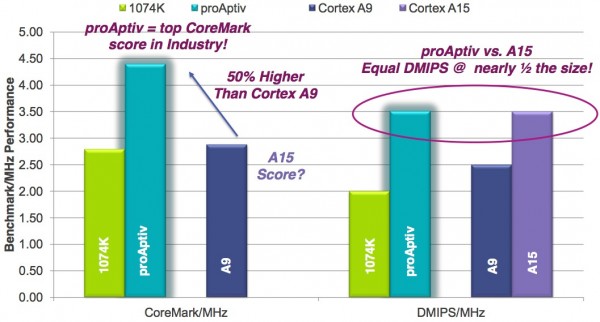 We thought Imagination had MIPS in the bag, but it seems that the fight is not over as another company, Ceva, is trying to outbid them for the MIPS architecture. But Imagination is not going to give up without a fight, and has raised the bidding price from the original $60 million to $80 million. This may not seem that much, but right now, Imagination only makes like $60 million a year in revenues.

So why is MIPS so important to Imagination? Imagination has the most market share in mobile GPU's right now, thanks mostly to Apple and Intel, which is using its GPUs in its Atom chips. But several threats are rising on the horizon, and in the same time I think Imagination has higher ambitions than just being a GPU designer.

The first threat is that ARM itself is now making the increasingly more popular and competitive Mali GPU chips, and Imagination fears that ARM will try to make their CPU's and GPU's ever more integrated. They have a good reason to believe that, because that seems to be the general trend in the industry right now, and ARM's has already made the new Cortex A15 and MAli T600 GPU's more integrated by getting them to share the same cache. This will help greatly for compute performance, and Imagination's GPU's might become less and less desirable in the future.

The second threat is from one of their biggest customers right now – Intel. Intel intends to give up on Imagination GPU's very soon, and therefore become one of their competitors, too, by using its own GPU's in their own mobile chips.

The third threat could even be from Apple. Apple is already making its own CPU cores now. Who's to say with certainty that they will not be making their own GPU's, too, in the future, especially if they intend to use the ARM architecture for Macs, too? Apple might want full control over their SoC's in the future.

All of this leaves Imagination in a pretty uncertain position as only a GPU maker, when everyone else around them is trying to integrate CPU's and GPU's further, and they know this because they already are a member of AMD's Heterogeneous System Architecture Foundation, where ARM is a member, too. They know CPU's and GPU's are going to become more integrated in the future.

That leaves us with the pretty logical conclusion at which they arrived, too, that they need to design their own CPU cores. But here they had two options – license the architecture from ARM, and design an ARM core like Qualcomm and Apple, or try to compete even harder with ARM and Intel, with their own CPU architecture. And that's where MIPS comes in.

I for one hope that Imagination gets to buy MIPS, because I know they are very serious about it, and although I'm a big ARM fan, it can't hurt to one more highly competitive chip architecture in the market, to give both ARM and Intel a run for their money, and force them to continue innovating even faster, and to compete even better on price (at least in Intel's case).

Imagination has their work cut out for them, though, as MIPS is a little behind ARM right now in many ways, but I think in 2-3 years we'll see Imagination's vision with MIPS start to shape up (if they manage to win the bid for it, that is).