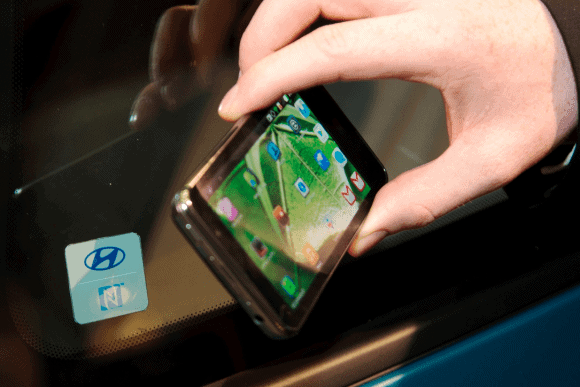 NFC has a promising future, and industries outside of the mobile technology field are starting to take notice and develop new and innovative applications. Hyundai, the South Korean automaker that exists as part of a multinational company that also produces Kia vehicles, has begun showing off a concept that will allow smartphone users to manipulate and interact with their vehicle using Near Field Communication, or NFC.

The manufacturer is showcasing this new technology on their New Generation i30 vehicle. The small sedan allows users to hold their smartphone up to an NFC tag located on the window of the door. The phone makes a connection with the tag and the door unlocks. Once inside the vehicle drivers will have access to a 7-inch touch screen that gives them full control of the vehicle, outside of steering of course. The touchscreen inside the vehicle can control music, phone connection, phone contacts, phone settings, climate control and all the other expected options. The system also features wireless charging, and it's believed the system will be compatible with devices such as the Nokia Lumia 920 and the HTC Droid DNA (or Butterfly), and the LG Nexus 4. They're calling the system "Connectivity Concept", and it has a lot of people very excited. Senior Vice President and Chief Operating Officer of Hyundai Motors Europe had the following to say about their new interaction system:

"Hyundai's Connectivity Concept showcases the brand's philosophy of making tomorrow's technology accessible to a wide range of customers. With this technology, Hyundai is able to harness the all-in-one functionality of existing smartphone technology and integrating it into everyday driving in a seamless fashion. As the technology continually develops there will be capabilities to store driver's seating positions and exterior mirror settings, providing customers with a comfortable and individual driving environment."

So far this technology is only being showcased in Europe, specifically at their regional headquarters in Frankfurt, Germany. However, the rumor mill is already talking about seeing this innovative use for NFC in North America very soon. At this point all information about the project is purely speculative, except for the small amount of information released by the European office. Hyundai has let it be known that they are using MirrorLink technology, and working with Broadcom Corporation on this project.

Interacting with vehicles and homes has been on the plate for a while with many smartphone manufacturers, but it will take action by forward-thinking companies such as Hyundai to bring these ideas to the real world. Hopefully, this is a step toward the future of smartphone interaction with the physical world.