Today, Google's magazine style app, Google Currents got a nice update. It hit version 2.0, and like every major version of an app or OS it had to get a huge changelog and it did. Google Currents is my favorite app to get news on my Nexus 4 and Nexus 7. It's easy to use and pretty nice on the eyes, and that was before today's update. Google Currents works really well on Tablets, it's like having each site you follow turn into a magazine. 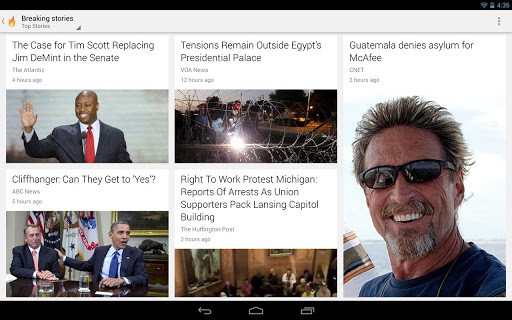 With the fast scan feature, it makes it easier to scan through your editions for new juicy content to read. With the new Edition-section chooser you can customize it to filter out sections you want to read and those you don't want to read. There is also a new Breaking stories feature, the breaking stores are ranked by Google News and links to the full content so you can get all your news as it happens.

This is a huge update for Google Currents. And if you're a heavy user of this app, you're going to love the new improvements from Google. It makes it much easier to use and the interface is even nicer to use than before. You can grab the update from Google Play right now, the app is about 6mb but once you start using it, it'll expand for cache and data saved by the app.

Who's downloaded and used the update already? Let us know how your liking it in the comments below. As for me, I love the new update and recommend everyone to use Currents now.