In 2011, Samsung introduced the world to the Samsung Galaxy Note. It was a 5.3-inch device with a stylus, known as the S Pen. It was initially only an International device, then Samsung brought it to AT&T in the beginning of 2012, and T-Mobile got it for a very short time this past summer. Now fast forward to Late-August 2012, just before IFA in Berlin. Samsung held their Unpacked event and introduced to us the Galaxy Camera and the Galaxy Note 2. The Galaxy Note 2 features a 5.5-inch display, Android 4.1, 2GB of RAM, and powered by their Exynos 4412 Quad-core processor which is clocked at 1.6GHz. So yes this thing is a beast. Then weeks after the announcement, Samsung decides that the Galaxy Note 2 will be available on all major US carriers. So the Galaxy Note 2 is now available on Verizon, Sprint, AT&T, T-Mobile and US Cellular, here in the US.

Editor’s Note: This review will be specific to the Verizon Galaxy Note 2. 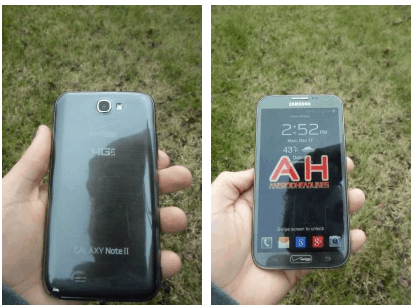 The Note 2 is BIG! But it’s not like we didn’t already know that. The Note 2 has a beautiful 5.5-inch display, and if you’re coming from a phone that was below 5 inches you’ll have trouble at first. After about a day of using the Galaxy Note 2 I was able to get used to the size and even use it one handedly like I do with the Nexus 4. The overall design is pretty plasticy but that’s what we’ve come to expect from Samsung. But because it is made of plastic for the most part, it makes the phone very light. Which is always good for a phone of this size. The Titanium Gray Galaxy Note 2 looks very nice, it’s got the brushed look to it which really stands out. It’s not an HTC-quality device but it is something that will feel light in your hands and look good when you’re using it out in public.

Then there’s that branded home button. If you’re following me on Google+, you’ve probably heard how much I disliked that branding at first and have now grown accustom to it. That big Verizon logo on the home button just looks awful. It takes away from the beautiful device. As you can see on the picture above it just looks completely out-of-place. But hey if you like that sort of thing, then go for it. For me, after having two devices that are not carrier-branded, I hate it.

So we all know by now that the Note 2 has a Super AMOLED display with a 1280×720 resolution. While the PPI on the Note 2 isn’t as great as the Galaxy S3 or even the Droid DNA, it’s still a nice display. The blacks seem to be blacker than on the IPS displays you see on LG devices, but it still doesn’t surpass the Super LCD2 and Super LCD3 that HTC is using on the HTC One X+ and the Droid DNA respectively. Those displays are just amazing. 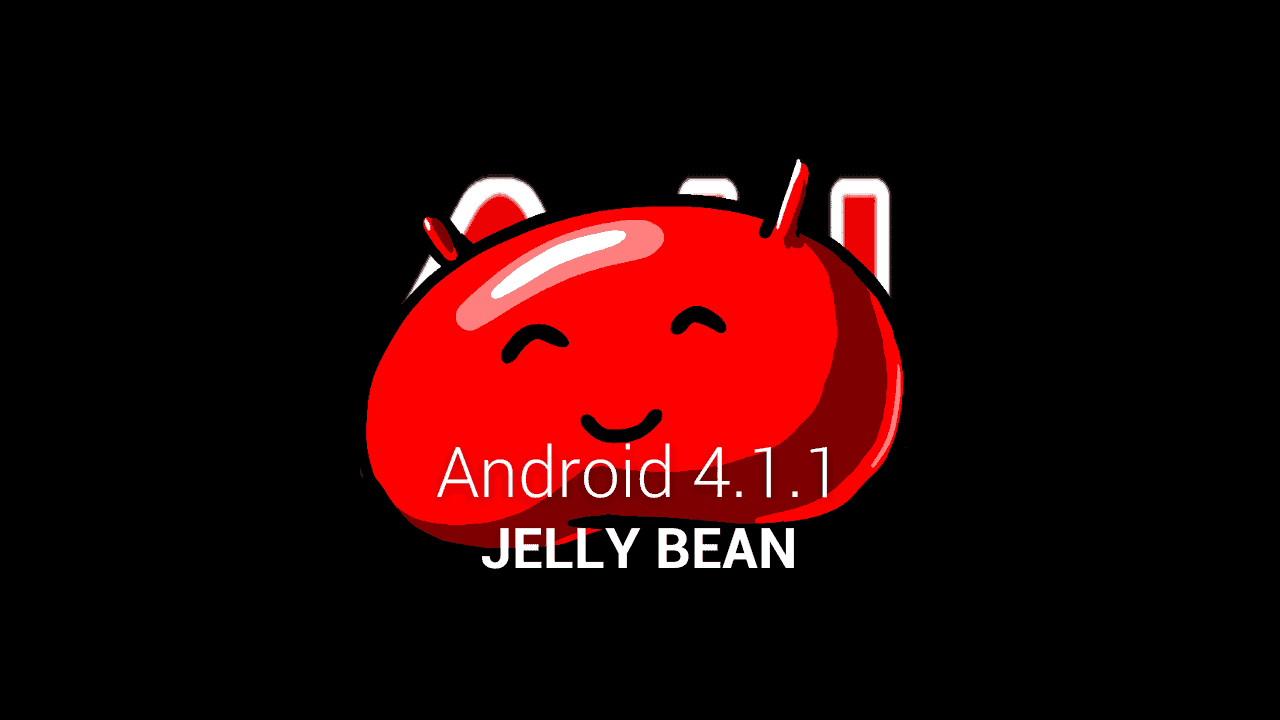 The Galaxy Note 2 comes with Android 4.1 – Jelly Bean installed. Which means it’s only one semi-major version behind the Nexus line. It also comes with Touchwiz, Samsung’s custom skin. Normally I don’t like custom skins, but Touchwiz has gotten much better over the past year since they started releasing devices with Android 4.x on them. I also have to say that Google Now is pretty fast on this device, not sure if it’s the quad-core Exynos processor or Project Butter or maybe a bit of both. But it’s definitely fast on the Galaxy Note 2.

It’s Touchwiz. So it’s not the best, but it’s not to bad either. At least I don’t think it’s that bad. Although Touchwiz still looks a bit like being in the Gingerbread era, it is great on battery. This same device on an AOSP ROM would not last as long as on a stock Touchwiz ROM. And when you have a huge 5.5″ display and 4G LTE running all day long, it’s important to have a long-lasting battery. But all around the device is very buttery smooth. Like I said above, I’m not sure if that’s Project Butter doing it’s thing or if that’s the quad-core Exynos 4412 clocked at 1.6GHz and the 2GB of RAM on board. But perhaps it could be a bit of both.

The Galaxy Note 2 has a ton of features that are specific to the device. Including S Voice, S Suggest, S Note, multi-window, and even more. There just isn’t enough time or space in this review to cover every single app. So we are going to cover S Note, multi-window, the S Pen and the Amazon Suite that’s new to Verizon devices. 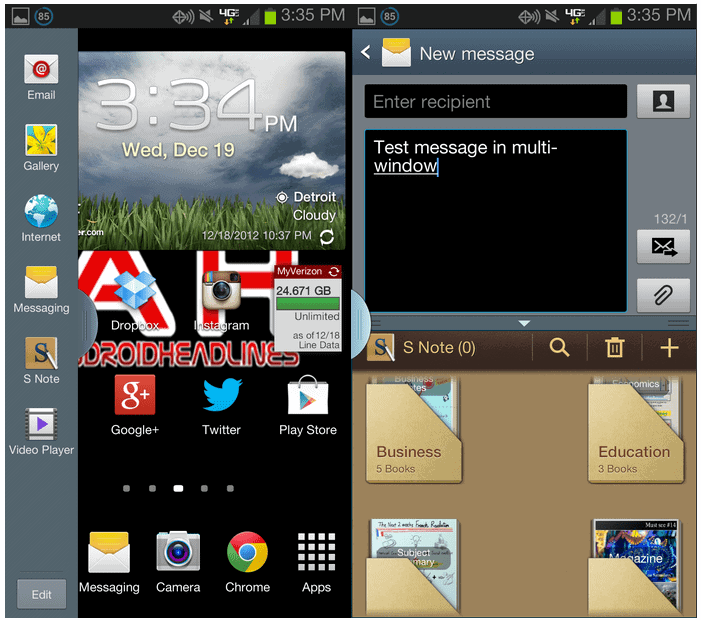 Multi-window is a great new way to multi-task on the Galaxy Note 2. But there is one major downside, it doesn’t work with all apps. Now if it did, that would be an awesome feature to have on a device with such a huge screen. But Multi-Window does work a lot better than it did on the Galaxy Note 10.1, so you can tell Samsung has put some work into this thing. Hopefully Samsung will push an update out soon to have all apps work in multi-window.

Amazon Suite is something new Verizon is putting on their devices. So in addition to the Play Store, you also have Amazon’s app store, and 2 other apps to go along with it. Just think of it as even more bloatware from Big Red. As you can see by the screenshots in the images below, there’s there Amazon app, Amazon Kindle, and Amazon MP3.

The S Pen. It’s not for everyone. Most of the time I don’t use the S Pen, but I did find that it works really well with Swiftkey Flow. It makes it much easier to flow all over the keyboard and more accurate than just using your finger. There are also a few cool apps that take advantage of the S Pen like the Paper Artist and S Note, but not many. 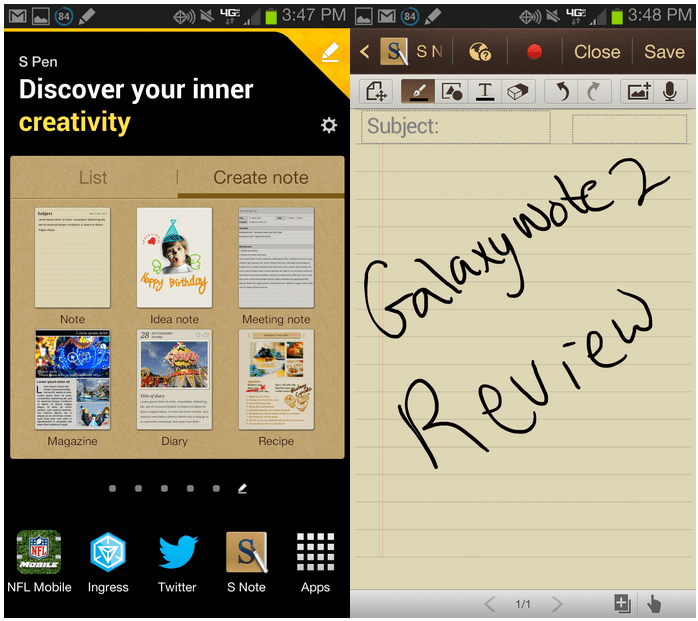 S Note is one of those apps that’s a must have for students. It’s great for taking notes, of course hence the name of the app. It also works really well with the S Pen. I didn’t use S Note a ton but I do know it’s a great feature in the Galaxy Note 2. 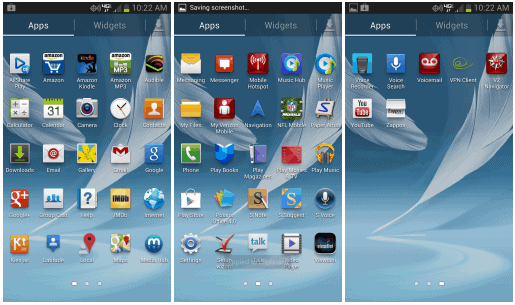 Well this is a Verizon device, so you know it comes full of bloatware. Including Verizon’s new Amazon Suite. Check out the screenshots above. That’s everything that is installed when you first turn the device on. That’s 57 apps, between Samsung’s bloat and Verizon’s bloat. The most of these can be disabled but there are still quite a few that cannot be disabled unfortunately. 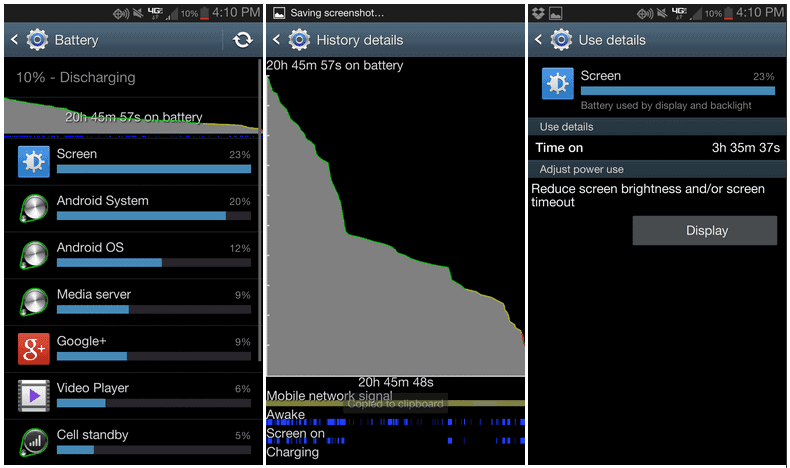 The image above is battery life all on 4G LTE and Auto-Brightness. No battery saving techniques at all. And I must say the battery in this phone is a huge improvement over other 4G LTE devices I’ve used in the past like the Droid Bionic and the Galaxy Nexus LTE. Down below, we’ve got battery stats for Wi-Fi only. 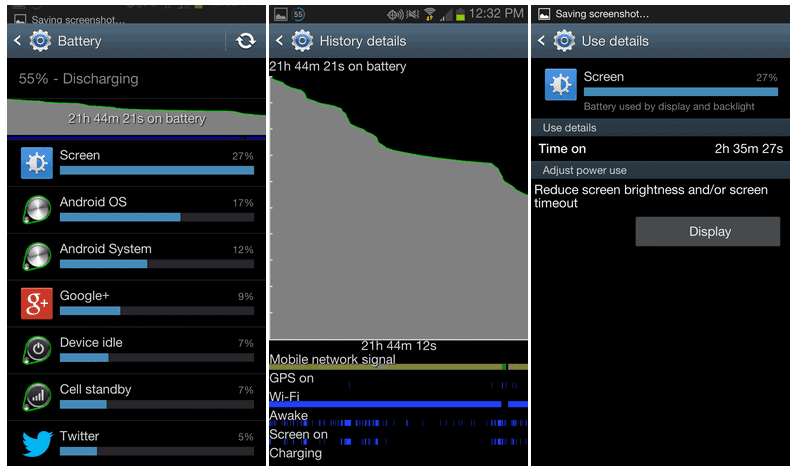 Now who’s ready for the ultimate battery test? Here’s the screenshots of playing Ingress on the Galaxy Note 2. It’s a beast when it comes to Ingress too. 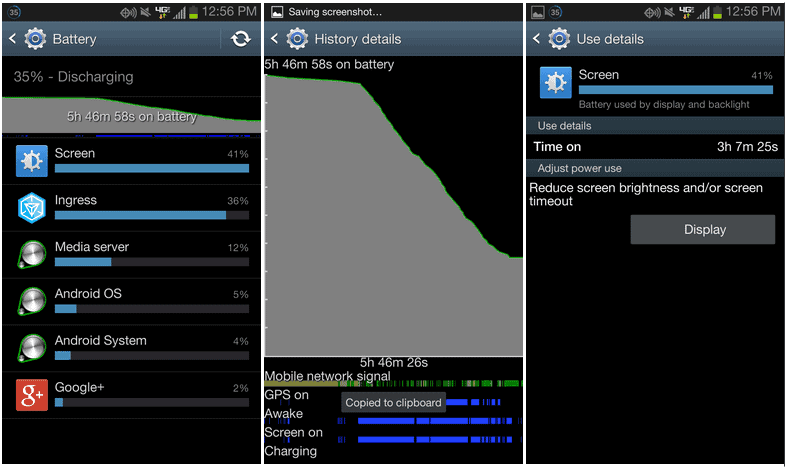 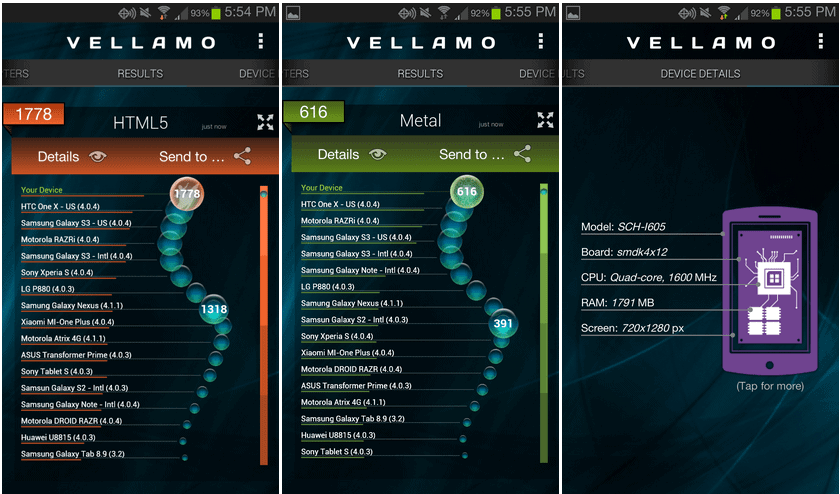 This benchmark was ran using Vellamo. It tests the browser and HTML5 speed along with Javascript. And I’ve gotta say it did pretty good compared to other devices. It out scored every one of them. 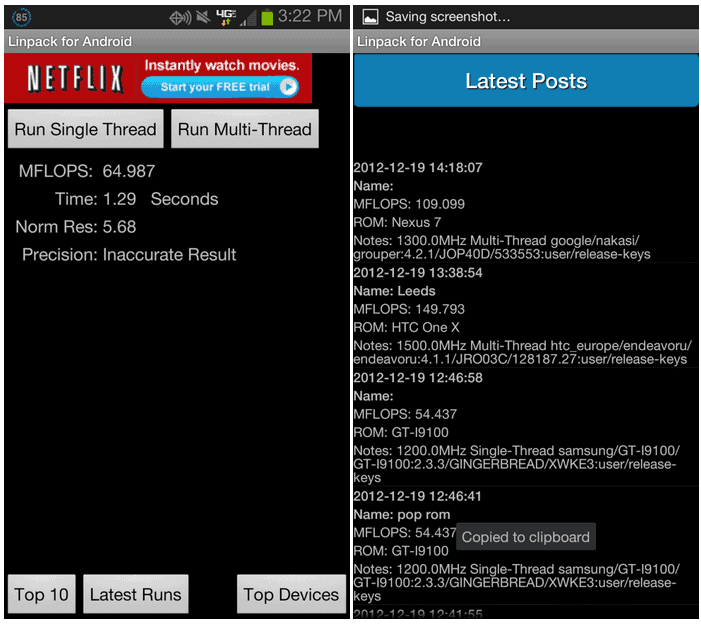 Linpack tests the speed of your ROM in MFLOPS (Millions of Floating Point Operations per Second). So the higher the MFLOPS number is the better and faster your device is. As you can see the Note 2 on its Stock ROM scored pretty well with Linpack. Right behind the HTC One X. The screenshot on the right has the top 10 devices with the best results. 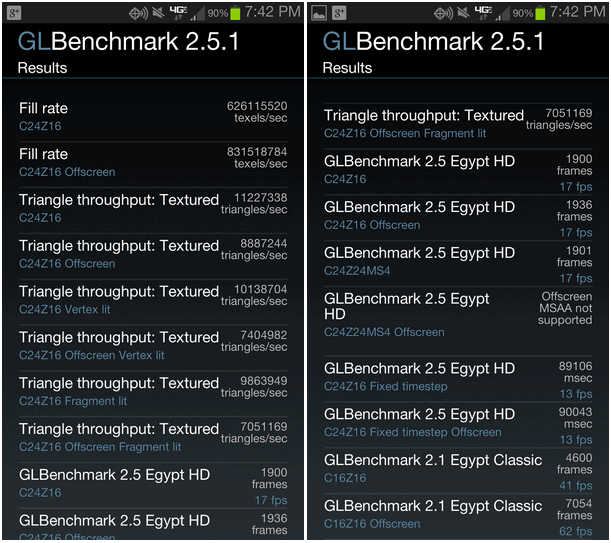 I tested the Galaxy Note 2 with several different benchmark apps, and GL Benchmark was the last one. This benchmark app tests the GPU performance, and as you might expect, the Exynos 4412 does very well in this benchmark, as you can see from the images above.

The camera on the Galaxy Note 2 is pretty darn good. For me, coming from the Nexus 4, the Note 2’s camera looked to be perfect in everything. From how quickly the app opens, to how quickly it takes photos, to the quality of the pictures. Take a look at some of the samples below. 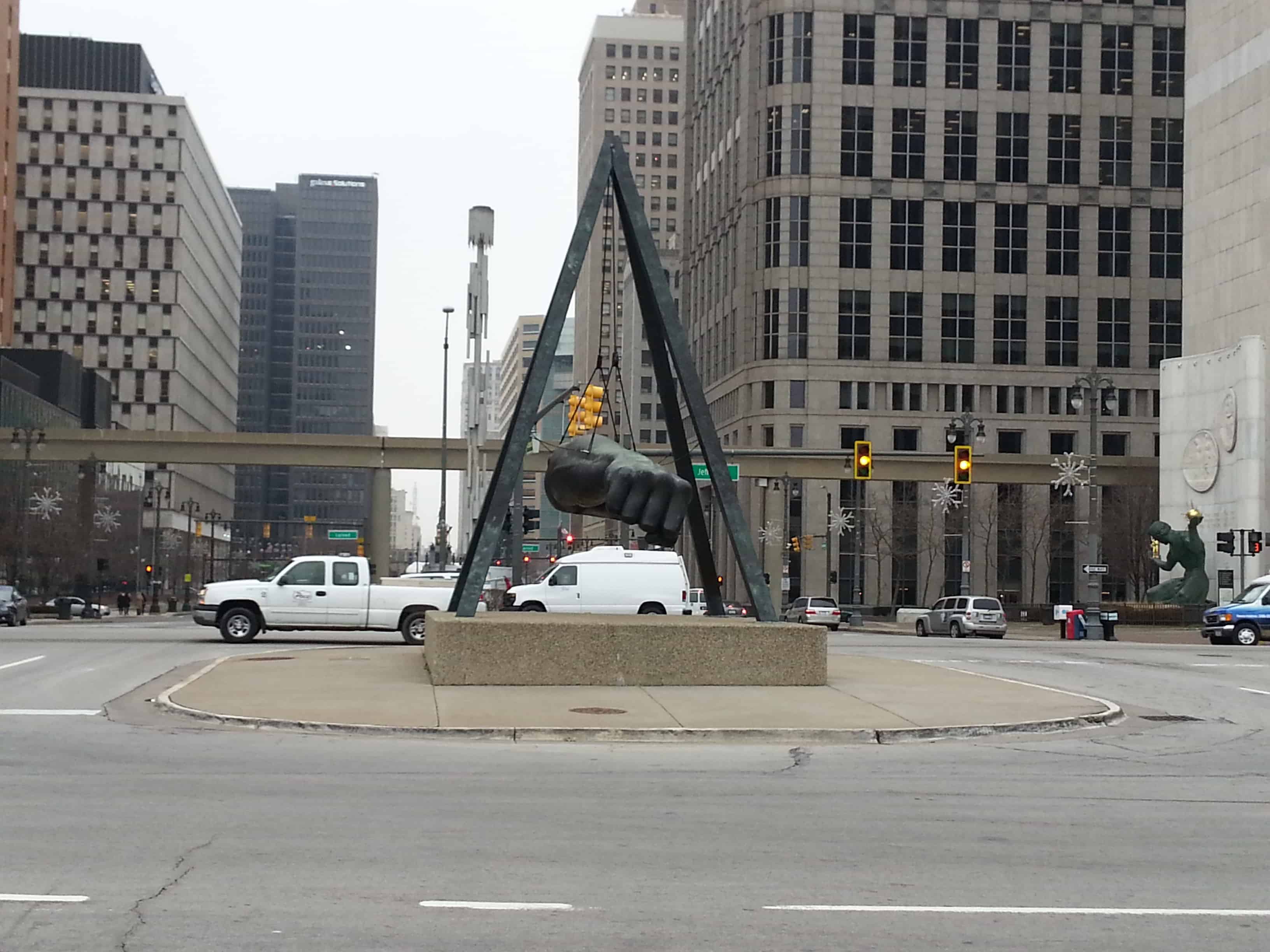 Like I said above with the camera pictures, the video is just as perfect. I’m not sure I’d want a better camera in my phone. You can check out the video below to see how good the video camera is on the Note 2.

I know not a lot of people talk on their phones a ton now, especially with all the other ways of communicating available like SMS, Google Talk, etc., but Call quality is still important. And every call I made on the Note 2, the quality was great! I had no problem hearing the person on the other end, and they had no problem hearing me. The microphone in the phone also seems to be a bit louder than some other current devices out there, which is always good.

The Galaxy Note 2 on Verizon connects to Verizon’s 4G LTE network as well as 3G. It also comes with NFC, Bluetooth 4.0, Wi-Fi Direct, DLNA, and more. The Galaxy Note 2, like most other Samsung devices, comes with Allshare pre-installed which has great DLNA support.

The Galaxy Note 2 comes in both Titanium Gray and Marble White on Verizon, Sprint, AT&T, T-Mobile and US Cellular.

The Galaxy Note 2 hit Verizon on November 29th and is on sale for $299 with a 2-year contract, or $699 without. The Galaxy Note 2 is similarly priced across the other 4 US carriers as well. Except T-Mobile who is charging a bit more.

Once you get past the size of the Galaxy Note 2, you are going to love the device. Battery life is great (even on LTE), its blazing fast and has a beautiful display. I’ve always said that the Note 2 was just too big for me. But now after using it for a little over a week, I can say that I love the size. In fact going back to my Nexus 4, it seems like the size of the iPhone. I know the Galaxy Note 2 isn’t for everyone, but if you want or need a bigger display and a bigger longer lasting battery, the Note 2 is the best thing on the market right now. Since the Motorola Droid Razr Maxx HD is only available on Verizon right now. I can truly say that this device has really surprised me. And I would definitely recommend this to everyone looking for a new Android phone. This thing can pretty much replace both your phone and tablet. Who remembers a time when we though 4.3-inch displays were too big? Yeah that wasn’t all that long ago. And now most devices are between 4.7 and 5.5-inches in size. It’s amazing how fast technology changes around here.