One of the shiny new features in Android 4.2 is built-in malware detection. But a report published today by  Xuxian Jiang, a professor of computer science at North Carolina State University indicates that Google's new malware detection needs some work, to put it mildly. Jiang's study exposed several Nexus 10 tablets to 1,260 malicious apps of various types. The Jellybean scanner detected only 193 of them. Math indicates that this is only a detection rate of 15.32 percent. But this study didn't stop there. Jiang also tested Avast, Symantec, and eight other 3rd party pieces of anti-virus software and discovered that they fared considerably better. Although this study didn't rank or rate these services, they were found to detect between 50 and 100 percent of the viruses that the device was exposed to.

Jiang wrote, in his report that was released today that "This mechanism is fragile and can be easily bypassed, It is already known that attackers can change with ease the checksums of existing malware (e.g., by repackaging or mutating it). To be more effective, additional information about the app may need to be collected. However, how to determine the extra information for collection is still largely unknownâ€”especially given user privacy concerns."

Essentially, Android is having the problem that any operating system has in its early stages. Hackers and those who develop malware are always one step ahead of the people developing software that protects consumers like you and me. This was a huge problem for Microsoft in the mid to late 90's. As Windows usage was growing exponentially, so were the opportunities for the dark side of the internet to spread malware. Microsoft is still working to get ahead of malware developers today, and I have no doubt that in ten years Google will still be working to keep nefarious software from infecting our Android powered jet-packs. 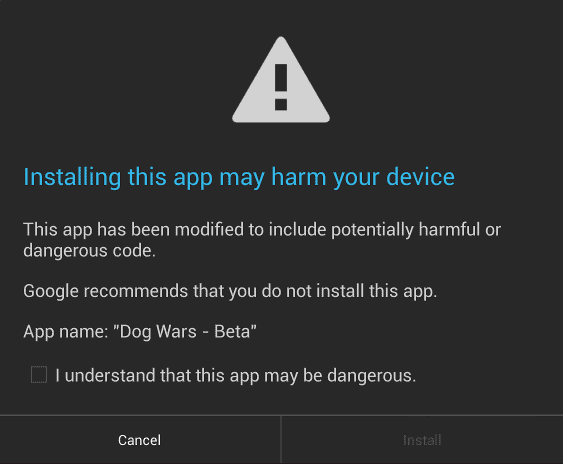 But should you be worried? The easy answer is yes. You should be just worried enough to be careful. "Sideloading" aka installing applications through sources other than the Play Store, is perfectly safe as long as you use common sense. Don't install an application unless you know and trust the developer (i.e. the Amazon App Store) and be careful with what you do with your phone. Don't dunk it in water, don't expose it to unfamiliar software. Treat your phone like the extension of yourself that it truly is. So the same principles that you learned when you first started using the internet still apply today when you surf use common sense, don't install anything calling itself a "toolbar" and you will probably be fine. If you do have concerns, or if you enjoy playing it fast and loose with the non-Play Store apps, go grab yourself a main-stream virus protection service. Have you had an issue with malware on your Android device? Feel free to share your experiences below.