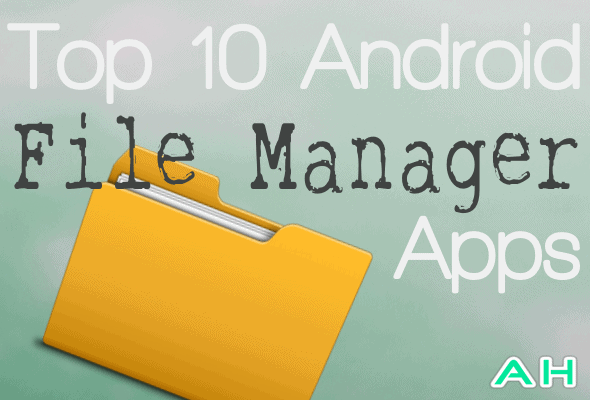 With Android there's a whole lot you can do with the mobile OS but with this comes having to worry about files and managing them. Having said that with Android you can do a whole lot with a good file manager. Apple can crow and crow about the ease of use when it comes to not having a file manager on iOS but when it comes down to it, we need to know where our files are and being able to do what you want with them is brilliant. After all, smartphones have been billed as portable computers for some time now so, why not use them like computers? It's not for everyone but when you need to get your file browser on, you need the right tool to get it done so, let's take a look at the Top 10 File Managers on offer for Android.

An app that does what it says it does is perhaps the best in its field, something that fulfils what it set out to do. Unfortunately, that app isn't this app and while File Manager is going to do everything you need it to, it's not going to win any awards doing it and it's not going to blow you away. With a UI that's reminiscent of the old days of Android. There are a few advanced features to the app like support for LAN storage as well as cloud storage but when it comes down to it, the UI really lets the app down.

With this entry into the fray there's something a little different when it comes to the interface here and it looks to me like a cross between Android 4.0 and Windows 98 but that's probably just me. X-Plore file manager will get you through all of the main functions that you need to and it'll do that in a unique way. The UI takes some time getting used to but, once you do get used to it it's work pretty well. There's support for root as well as a whole host of Cloud storage options, making this a decent entry to do it all but it could do with some more polish.

It's been around for some time now and is your go to app if you ZIP archives in mind. AndroZip does a lot more than just handle ZIP files though, it also handles anything you want to throw at it. It's real strength is still the way it can handle archives and with support for the following: ZIP, encrypted ZIP, RAR, TAR, GZIP and BZIP2 it makes a lot of sense to have this installed on your phone, especially if you have a lot of attachments coming in from your e-mail. Interface wise the app is pretty standard and you won't come across any issues using the app. There's also support for encrypted archives making it perfect for sensitive documents.

Since the advent of the improved Holo theme in Android 4.0 and above, apps have gotten to look a lot nicer in their appearance and how they behave when you're using them. There's no question about it, OI is a good looking app if not solely thanks to its use of the Holo theme. The app supports everything you'd expect but, what's really interesting about this app is the fact that it's Open Source and the code is available for you to take a look at here and they openly encourage people to help translate the application through Launchpad. This might not be the recipe for a good application but it certainly helps having the code out in the open. Hopefully, this will only get better and better.

Once again, this entry features a different UI in that it looks just like Dolphin Browser but, for files, thanks to its use of tabs across the top of the app. There is a paid version of the app alongside a free version but, the free version doesn't come with any ads and you're only really paying for root access. File Expert brings everything you expect as well as support for many cloud storage options and it doubles as an FTP client which is really nice. There's a lot to love about the app and it works really quite well.

A lot of people swear by this app and I will confess that this has been my go to file browser for some time now but, I recently moved away from the app after I couldn't deal with its niggles any longer. There's some strange quirks to the app such as up being the same as back, something that should never happen. However it's an extremely popular app and even after over 200,000 ratings it still says above 4 stars making this a good solid choice. Everything you expect here is present as well as some support for online sources and FTP.

Another one of the old guard when it comes to file broswer apps, Astro has been a fine choice for hundreds of thousands of users. It's undergone somewhat of a transformation recently and it only gets better and better. There's been reports of it not updating when files are moved around but for the most part this is one of the best file browsers you can get. It's got a good theme and after all, all those people can't be wrong, can they?

Realistically, most of what we do with a file manager is to copy and paste things from one place to another and delete stuff that we don't want anymore. The fact that we can do this on Android whenever the hell we want is a true test of its strength – I don't need a computer to rule my smartphone and I haven't plugged mine into one in quite some time. With inKa you can do everything you want to do and do it in style. The only app in this list to have a uniform UI that is super easy to get to grips with is this one right here. There might not be many strings to its bow but what it does do it does it in style.

Let's face it, most of what you're going to be doing with a file browser is related to having root. You want to change some UI sounds or maybe install a new system app, edit the old build.prop well, you're gonna need root for that. If you have root then Root Explorer is your best bet for this, it might be a little pricey but I've been enjoying the benefits for years now. It's got a built in text editor making the numerous tweaks I need to apply to my build.prop super easy and you can also set permissions simply and properly using this. If you've got stuff to tinker with then you need this app.

While it's not strictly a file manager in the normal sense of the word, this is absolutely fantastic. This is the best and easiest way to transfer files to and from your phone and your PC. It relies on the two being on the same network and it makes it ridiculously easy to add new music, get those holiday snaps off of your phone or whatever else it is you need to. Don't worry about not having your microUSB cable just go ahead and get it done. There's a lot more you can do with AirDroid but for the sake of this list it makes for the best and most comfortable way to get files across from one device to another.