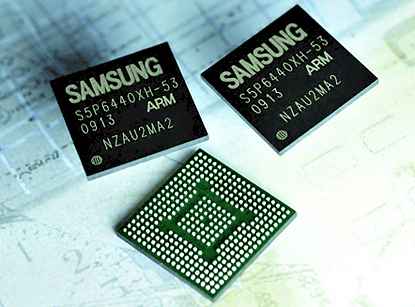 It would seem Samsung is getting the last laugh these days. Samsung is now the world's number one handset maker in terms of volume. They even make a lot of parts that are used though the industry. Add that with the success of the Samsung Galaxy S3 and the Galaxy Note 2, it seems like they are killing the market.

However, court cases with Apple have seen their bad times, as Samsung is appealing the verdict that is set to cost them over 1 billion dollars. It appears Samsung plans on making that money back from Apple seeing as they have no where they can go.

MarketWatch has said that Samsung raised the cost of processors Apple uses in every iPhone, iPod Touch, and iPad by 20%. There isn't much apple can do about it, as they are signed in until 2014 on a contract, as well as they can just take the processor to another company for them to make. Apple has reportedly accepted the deal and will start paying the extra cash for now.

Although its expected for Apple to switch to another chip manufacturer in 2014. It's apparent that Samsung is moving to milk Apple for all they have without any need of the courts. An Expected 200 million units will be sold this year and more are expected to sell next year. So you can expect Samsung to be in the headlines a lot next year with more record-breaking profits.