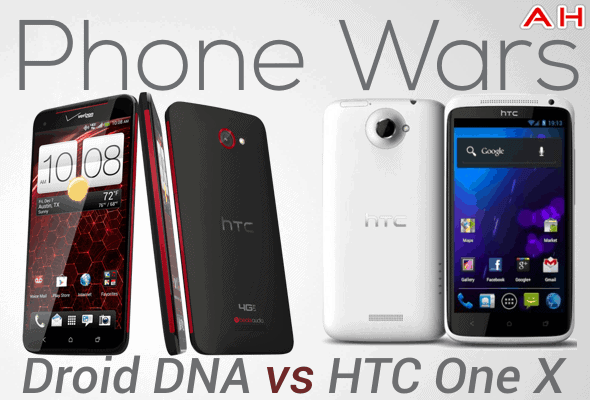 It's a battle of HTC phones today. In one corner we have the brand new 5.0" HTC Droid DNA that's on Verizon's network (only), and in the other we have the 4.7" HTC One X which was announced at Mobile World Congress back in February 2012. These are two of HTC's top of the line phones, and on different carriers. If you aren't familiar with our Phone and Tablet wars, this is a special feature we do here at Android Headlines where we compare two high-end devices and show you the facts with a little bit of our opinions. We bring you the specs side-by-side, along with our thoughts on both devices, and some Pro's and Con's on each device. So let's get started with the specs.

Special note: We will be comparing the International variant of the One X, not the AT&T variant. 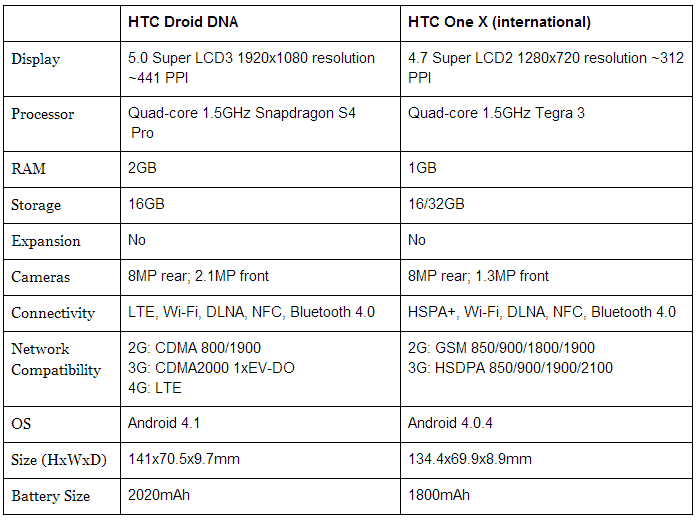 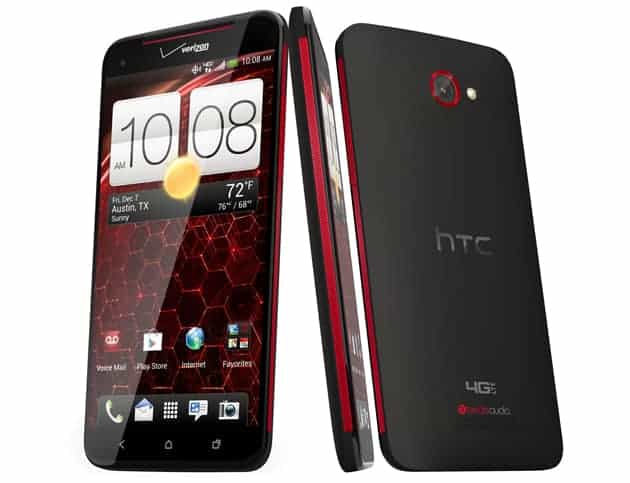 Simply put, the Droid DNA is a beautiful device but it's not in the same league as the Galaxy Note 2. The display on the Droid DNA isn't much larger than other recent phones. For example the Nexus 4 is 4.7-inch, the Samsung Galaxy S3 is 4.8-inch and the Motorola Razr HD's are 4.7-inch. So like I said the Droid DNA is kind of in the middle of the HTC One X+ and the Galaxy Note 2 in terms of size. On the software side of the HTC Droid DNA, we have Android 4.1 – Jelly Bean complete with Google Now, Enhanced Notifications, and Project Butter. And on top we have Sense 4+, which is even faster than Sense 4 was on the HTC One X, EVO 4G LTE, Droid Incredible 4G LTE and a few other HTC phones released earlier this year. If you haven't seen the Droid DNA, check out the image above, it looks beautiful especially with the red accents on the sides. 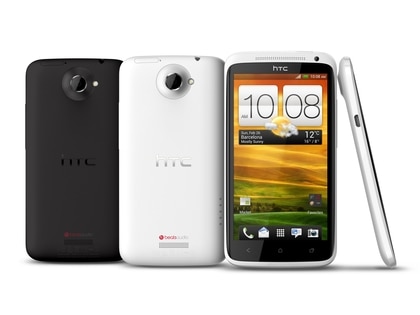 The HTC One X was the beginning of the One Branding that didn't quite take off. It appears that the One branding is only for GSM phones. As none of the One family has made it to Sprint or Verizon, just variants under the Droid (Verizon) or EVO (Sprint) names. The One X was one of the first quad-core smartphones to hit the Android market. The HTC One X has a quad-core Tegra 3 processor, while the HTC One XL (LTE variants) have a dual-core Snapdragon processor due to the LTE connectivity. Much like the Droid DNA, the One X comes with Android 4.0 – Ice Cream Sandwich and Sense 4 on top. Sense 4 was a huge improvement over previous versions of Sense. Now let's take a look at some Pro's and Con's of the HTC One X.

Without a doubt it's the HTC Droid DNA. Why? Glad you asked. Simple due to that screen, having newer firmware, a better processor and more RAM. But if you're not on Verizon you'd have to choose either the One X or the One X+ anyways. So once again this is all due to carriers wanting exclusivity on phones. Which needs to stop, and Samsung took a step into fixing that with the Galaxy S3 and Note 2. Hopefully we'll see more manufacturers following them in the future.