The trend toward devices with internal batteries, ones that can’t be replaced, has come at the dismay of many power users who often need to switch to a fresh battery in the middle of the day. The Nexus 4 has a “non-removable” battery like most people expected, but it looks like it might be a lot easier to access than many might assume. You’re probably not going to make a battery swap in the middle of the day, but if you run into an issue with the battery, at least you know it won’t be impossible to replace.

Defective batteries and burn-out are a real concern with modern mobile device batteries, and while it may be fairly rare for something to go wrong, anyone with a smartphone who’s not willing to disassemble the entire device can tell you how frustrating it is to lose a phone to a bad battery. On November 2, a follower of Brian Klug, Senior Editor for Anandtech.com, sent him a tweet about battery replacement for the Nexus 4 on Twitter. Mr. Klug responded:

@aatifsumar there are two torx screws, then some plastic clips, it’s easy

Aatif pushed for a little more information and Mr. Klug responded with a great photo of the battery situation:

The 2100mAh battery should be fairly capable of handling a day of moderate use, but for the fear of battery failure this is great news. Mr. Krug came through with another photo a little later giving a bigger picture of the situation. 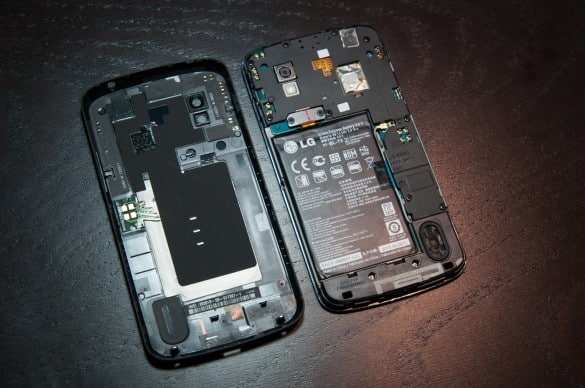