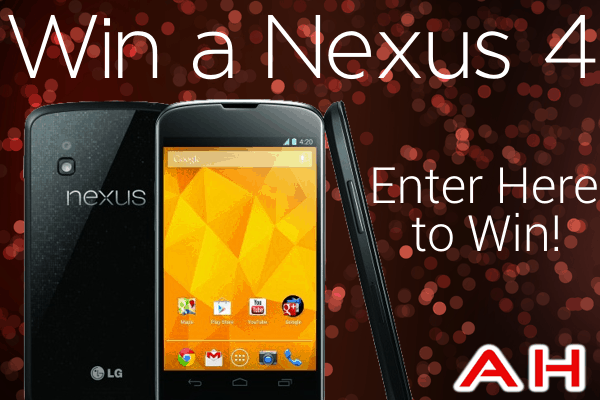 We are giving away a brand new Google Nexus 4. Before you continue reading this, if you haven't read our review go and read it now then come back. The Nexus 4 has been a pretty hard device to order, but we managed to get one to give away to the loyal readers of Android Headlines. This is our way of saying "Thank You" for continuing to support us.

Now onto the actual giveaway. So what are the rules? Well they are pretty simple. You can get up to five initial entries by doing the following

Additionally you can get more entries by having other people click on the link you shared on Twitter, Google+ and/or Facebook. Which means you'll have a higher chance at winning. You can also get five entries per email address. The contest will be ongoing until January 31, 2013, which means everyone should have hundreds of entries by then.

Update: ….and we have a winner!
Congratulations to Shane Thomas!
Advertisement
Advertisement
Trusted By Millions
Independent, Expert Android News You Can Trust, Since 2010
Publishing More Android Than Anyone Else
23
Today
67
This Week
322
This Month
5066
This Year
106541
All Time
Advertisement