The HTC Droid DNA has double the pixels on a large 5" screen (1920×1080 vs 1280×720), while keep the same "standard" 2,000 mAh battery, so most of us would expect the phone to have a much lower battery life compared to its 720p rivals. But according to GSMArena's tests, apparently the HTC Droid DNA's battery life, while it may not be the best, it doesn't look like it's the worst either. 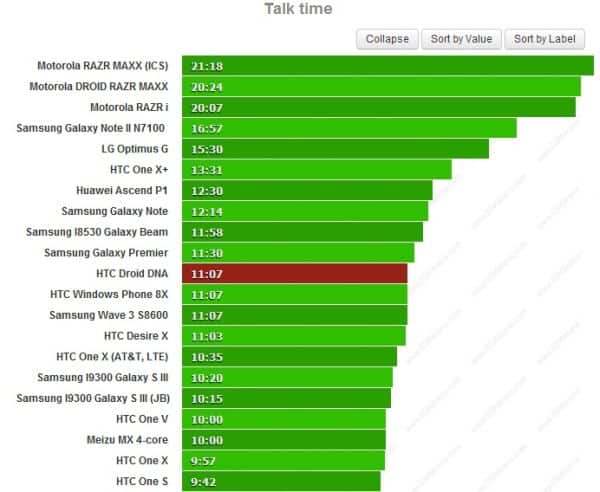 It doesn't look like it can outperform devices with larger than 3,000 mAh batteries like the RAZR MAXX models and the Note 2, or even the recently launched HTC One X+, but it seems to outperform most of the other HTC phones launched this year. However, this could be simply because they are using more efficient radios and software for those radios. So let's move on to web browsing. 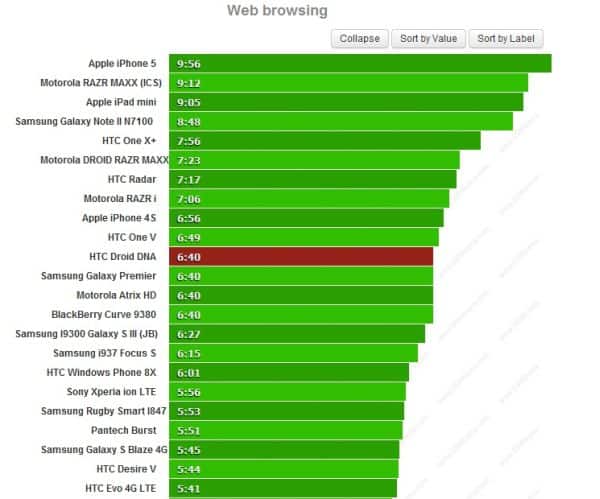 Here we can also see that it's nowhere near being the most efficient device when it comes to browsing the web, but it seems to beat some of the more recent flagships like the Atrix HD and even the Galaxy S3. Browsing is quite a battery draining activity because the processors will be fully utilized to finish the loading of the page as soon as possible. Browsing is also one of the few types of applications that can take full advantage of all the available cores. But again, the HTC Droid DNA doesn't do too bad here. 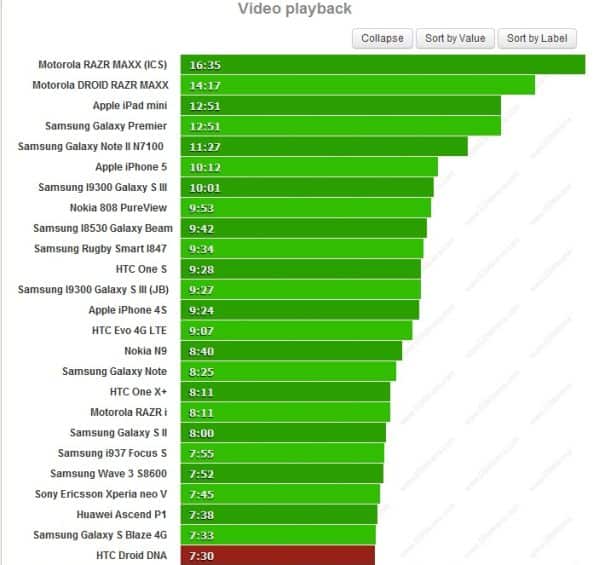 In video playback, the HTC Droid DNA doesn't seem to be doing nearly as well as in the other tests, and it seems to finish at the bottom of GSMArena's list. The Galaxy S3 and the One S seem to beat it by a significant margin when it comes to watching videos on them. However, GSMArena seems to mention playing Full HD videos a lot on this part of the review, and if they indeed tested it while running 1080p video compared to the others that were only running 720p video, then that would explain the big difference in results.

Overall, the HTC Droid DNA doesn't look as bad as we thought it would in terms of battery life. So what can explain this? Perhaps the biggest factor is that the new Super LCD3 is about twice as efficient as the old Super LCD2. If it's twice as efficient at the same resolution and brightness, but it uses twice the pixels here, then the power consumption of the display should be pretty similar to the one on the One X or One X+, which seems to be the case here. It will be interesting to see how the Super LCD3 performs with a 720p resolution and a 2,000 mAh battery in future HTC devices.