There’s a new rumor doing the rounds – courtesy of digitimes – that Google will be launching yet another Chromebook in 2013 that will feature a 12.85″ screen that’ll be touch sensitive as well, something that we have yet to see on a piece of hardware running Google’s Chrome OS. Some time ago there was a rumor that did the rounds concerning a tablet running Chrome OS was to be launched, thankfully such a thing never got released. There would be little point in Google to back Android tablets when pushing their own Chromebook tablet. The OS has come a long way since its release and while it might still be a glorified web browser, they’ve made some adjustments to the overall experience, closing the gap between permanent web browser and fully-fledged OS. 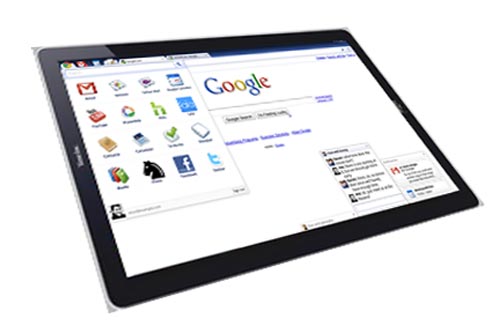 With the Aura update, Google has proved that there is a place for Chrome OS, with a little tweaking it can be a pleasant OS to live in. Recently, Google and its partners have released some more hardware that not only come in at some impressive prices but bring interesting hardware with them. For instance, the new Samsung Chromebook that features the same Exynos 5250 in the Nexus 10 clocked at 1.7 Ghz comes in at just $249. Then there’s the Acer C7 which features more traditional hardware at a price of $199.

Now, there is talk of Google releasing a Chromebook, complete with touchscreen to market in 2013, with the most interesting part of this rumor being that Google are tipped to release it completely under their own name. With Compal doing the assembling it would be the first time that Google have gone their own way on any piece of hardware – aside from the failed Nexus Q – and the first Chromebook to feature a touchscreen.

For Google and Chrome OS it’d make a lot of sense to launch something like this, with Windows 8 convertible laptops already flooding the market, imagine the amount we’re going see at CES next year? It’s not entirely out of the realms of plausibility either, as there is support for touchscreens in Chrome and there’s a laser focused team of developers on the Chrome team that could make it happen. HTML5 and WebGL are fast becoming the standard and with them will come more opportunities for web apps to rely on touch Now that ARM Cortex A15 processors have proven themselves to run Linux based OSes pretty well, Google could very well take away some of Microsoft’s thunder and steal a little lime light from Windows 8.