When I woke up yesterday morning and found an activation code for the Ingress closed beta I was excited. Little did I know the journey I was about to embark upon. A few days ago I wrote this article that was felicitously entitled “Google’s New AR Offering Might Take Over the World.” My attempt at hyperbole might have ended up being an understatement.

For those of you who have no idea what I’m talking about, Ingress was released to a very limited audience late last week. All we knew was that it had some awesome marketing behind it, as well as the ambitious goal of creating a world-wide augmented reality game that revolves around real-life 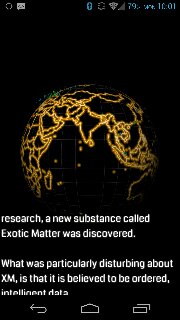 landmarks. The fight for the few access codes that Niantic Labs is releasing has been getting pretty intense over on Google+. +Brandon Badger is currently dishing out activation codes to anyone who impresses him with Ingress related art work. Unsurprisingly, the Google+ community has turned out some pretty impressive memes, videos, more videos and designs.

We need to start out with a little background information about the exceedingly complicated and mysterious conspiracy/back story that surrounds Ingress. It seems that the Large Hadron Collider ruptured the fabric of space and is allowing a form of energy/matter called XM (exotic matter) to 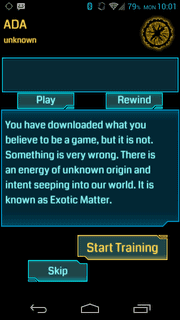 leak into our dimension. Portals (represented by local landmarks) secrete a mysterious mind-altering energy and are bridges between our dimension and the one inhabited by an unknown (race? species? force?) group called the Shapers. The game is divided into two factions: The Enlightened, who seek to embrace and form an alliance with the Shapers, and The Resistance, who are fighting to prevent what they see as the takeover of the human race by this mysterious mind-controlling energy that seeps through the Portals.

As you move around your town/ home/ workplace you will collect XM (represented by glowing dots on the map) you can then use it to gain control of various Portals that are located in statues, museums, parks and other landmarks scattered around your home town. XM is used to attack enemy portals. Once an enemy portal is sufficiently weakened, it can be captured by placing resonators around that Portal. Once your faction controls a Portal you can set up Portal Shields that will strengthen your hold on that particular landmark. If your faction can gain control of and link three Portals they will form a Mind Control Field. The number of people living in that control field then increases the Mind Unit score for your faction. As of this writing most of midtown Manhattan is under a Resistance Control Field. Of course, this could change at any moment, as players all over the world are constantly hacking Portals, collecting 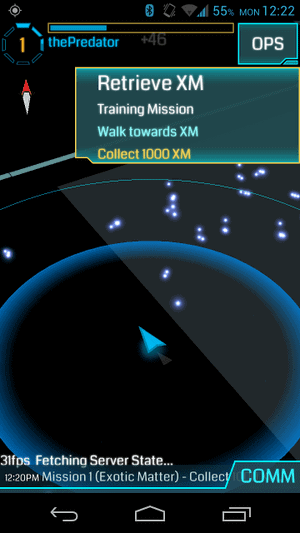 weapons and upgrades that can be used to defend, attack and reinforce Portals, and forming Control Fields that put more and more minds under the control of their faction.

Actually learning about and playing the game is surprisingly simple. Once you create your user name you will be walked, step by step, through a tutorial that will explain the basics of how to collect XM and how to gain control of Portals. Once you have chosen a faction you will be presented with a very detailed, beautifully designed map that will show you the XM all around you that you can collect, as well as nearby Portals. Teamwork is a vital part of each faction’s efforts. I’ve already joined several groups that are working together here in the Chicago area on Google+ and Facebook. Most of them are easy to find, but they will want to verify that you are indeed a member of their faction before they allow you to join. Some of the Portals in downtown Chicago have been changing hands all day. Its amazing how quickly people on both sides are getting organized and working together to control large parts of our major cities.

Browser-based access to the game is also available. This gives you the ability to view anywhere in the world and see what Portals each faction controls in that area. The further you zoom in, the more portals you will be able to see. This is actually an important part of the game-play because it allows you to see much more detail about each portal. When you first get started, use the browser to plan out your first trip around town. You’ll be able to see where your faction needs the most help, and where there are unclaimed Portals that are relatively easy to gain control of. 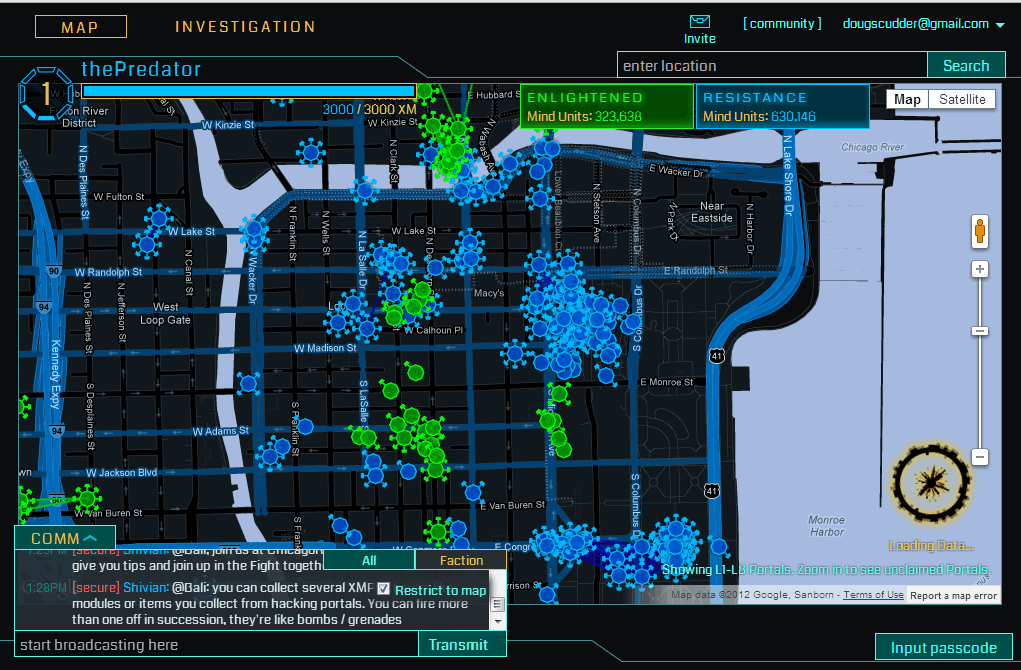 There is a vast cast of characters and shady organizations that surround  the appearance of this mysterious energy. Each has their own motivations and goals, but very little has been revealed thus far. For instance: Tycho, a secretive comic book artist is shown being thrown out of a 2012 Comic Con panel here. He also has a Tumblr account that raises far more questions than it answers. He seems to have been suffering from visions for some time and they caused his break down at Comic Con. 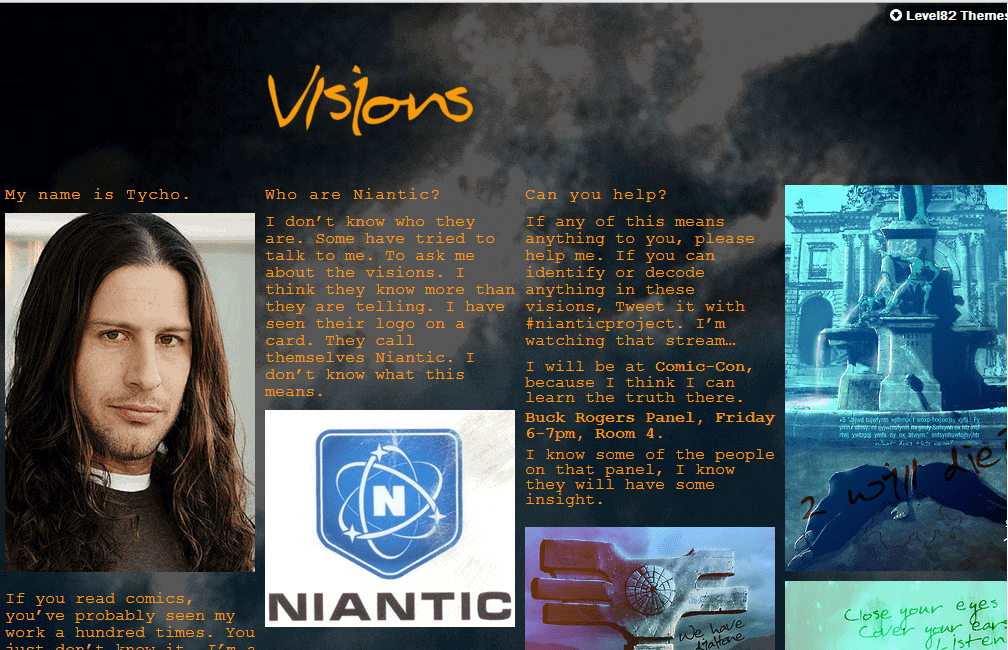 One of the many organizations involved in this web of lies is the National Intelligence Agency (NIA). They are apparently investigating this new energy and the motivations of the Shapers. But their goals, be they nefarious or altruistic, are unknown. The developers that actually released Ingress are also somehow involved in the mystery that surrounds us. To even begin to grasp what is happening and why you can visit the aptly named, Sphere of Weirdness, which is essentially a poster board of audio recordings, video, and documents that are all clues as to who is behind all of this and what their motivations are. More content in various forms is added every day. 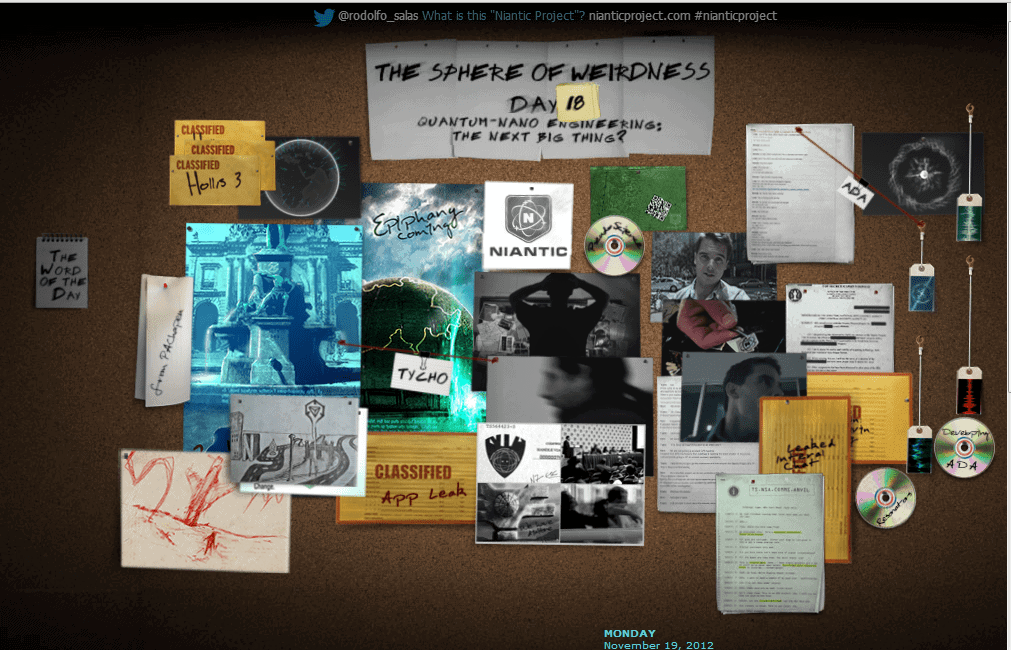 If you do a little digging over on Google+ you will find stories posted by people that may or may not be real. I’m honestly not sure at this point. I’ve been consuming every piece of Ingress related news and media that I could get my hands on for the last 24 hours and the line where the game ends and reality begins is starting to get a little fuzzy. These Google+ accounts tell fantastic stories of the odd behavior of friends and relatives. Some of them are evangelizing for the Enlightened, claiming to have found a piece and knowledge that they want others to share. Others are warning humanity against this new threat, and are encouraging anyone who will listen to join the Resistance.

Explore this mystery to your heart’s content, but be careful. If you spend enough time focused on this, it all starts to feel real… but it isn’t. None of it is real. Its all just a game.