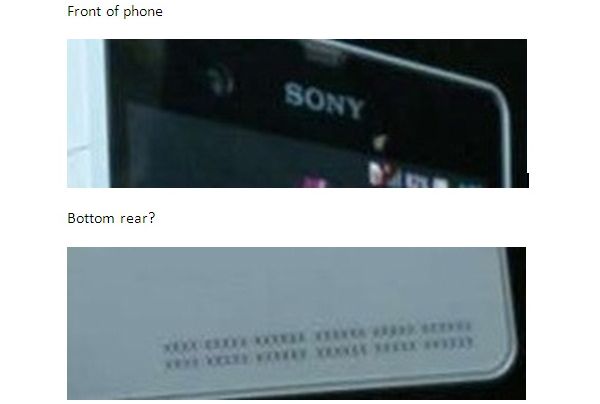 We have already seen some juicy details about two upcoming Sony smartphones namely, Odin and Yuga. The Odin (C650X) is rumored to be a 5-incher phablet and the Yuga (C660X) will sport a 6" display, according to unconfirmed reports. It is assumed that Sony will launch unveil both flagships at CES or MWC next year.

We've already seen the 5-inch Odin's leaked image in the wild (literally) and we've have also seen the Yuga show up in the AnTuTu benchmark scores. So, we can safely assume that Sony will be revealing both phones sooner rather than later. Today, we've again got our hands on a couple of blurry pics supposedly of the Sony C660X "Yuga". These images are of low quality and show just a part of the smartphone, we're not even sure if it is the said device or not but still something is better than nothing.

As you can see above there are two parts of the image, one that shows the top of the phone (Front) and the other shows bottom of the phone (Back). We can't make up anything from the images but looks like Sony is sticking to the same design pattern as of their 2012 XPERIA line-up. The Yuga is rumored to sport a glass chassis and will measure in around at 8mm thin. It is also reported to sport a Full HD 1080p display with WhiteMagic technology – that saves upto 50% of power consumption and displays sharper colors. However, none of these reports have any authenticity and there have been no official statements by Sony about either device. So, till then all we can do is speculate about the features of these phones, until Sony speaks out.

What are your thoughts on a 6" display? Do you think that is more in the Tablet area or is it still a phablet?