Many of us thought today would be just another ordinary day now that the Google event had been cancelled thanks to Hurricane Sandy. Even though the storm is brewing, Google had another idea in mind! No hurricane was going to stop the official releases of all the ‘goodies’ we have been waiting for. Yes that is right, Android 4.2 is here, and it’s “a new flavor of Jelly Bean.” I know many of you expected Key Lime pie, but soon my Android fanatics soon!

So what does Android 4.2 have to offer us besides being showcased on the newly released Nexus devices?  I am here to tell you!

Miracast is an “industry-standard Wi-Fi display sharing protocol that allows new devices like the Nexus 4 to stream audio and video to TVs.” How cool is that?! My first thoughts on it were not all that great, but a phone that I can sync with my 52″ flat screen TV? Now we are talking! Miracast boxes for TVs are also expected to go on sale as well, and shouldn’t be anymore than $99.00, if they are you are getting ripped off!

With Google incorporating such a great feature into the Nexus devices, this means Miracast will now be incorporated into TVs as well. LG has already given their 100% commitment to all 2013 smart TVs to have Mircast. Google also sported a demo of this technology on the Nexus 4, which we are anixously waiting for yet!

If anyone has seen or used swipe, this is the general idea only better! You just slide your finger from letter to letter and it forms words for you! The words will also form above where your finger is located, so it should be easier to see. It also works hand in hand with Google’s “Swiftkey-like auto prediction.” Simply start swiping “good” and it should predict the following word to be “morning.”  Whoa, that is one mighty smart keyboard prediction! 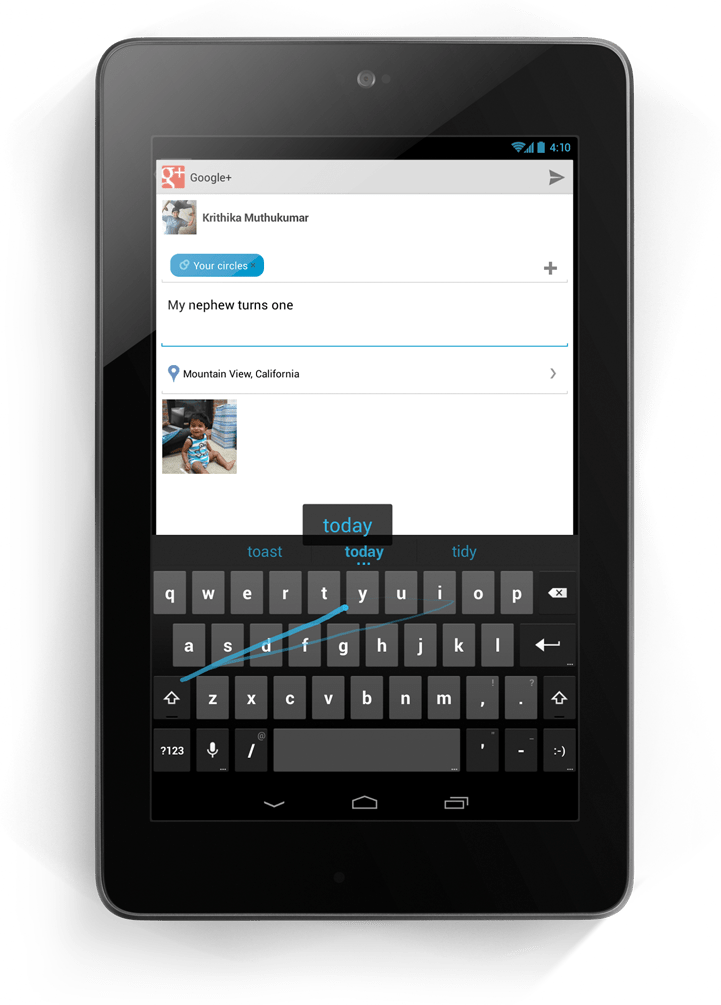 With this new feature you will be able to snap a picture in pretty much any direction! View them, share them, or add them to Google Maps! You have tons of possibilities here! You then can create a “stunning 360-degree immersive photo sphere! I’m a bit of a picture fanatic and I love capturing memories. Not only that, but I love playing with the pictures and designing as well when I have the time. 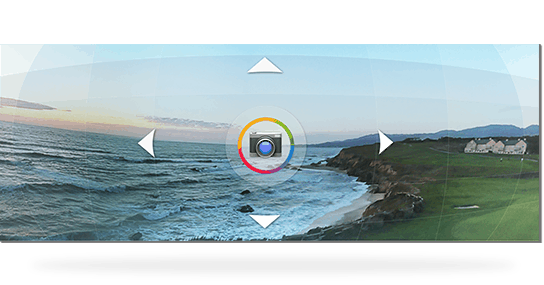 Have only one tablet, but multiple family members who use it? No problem, Android 4.2 now supports multiple users. Each user gets their own space, homescreen, background,widgets, apps, and games! I have to say this is the best feature, because my 8 year old and I both like to game, so it’s hard to play a game that he enjoys just as much as I do because then I’m not really playing MY game! What does that mean? It means each user gets their own scores and levels!. No more having to backtrack to where I was because he’s like 20 levels ahead of me. I like that sounds of that! 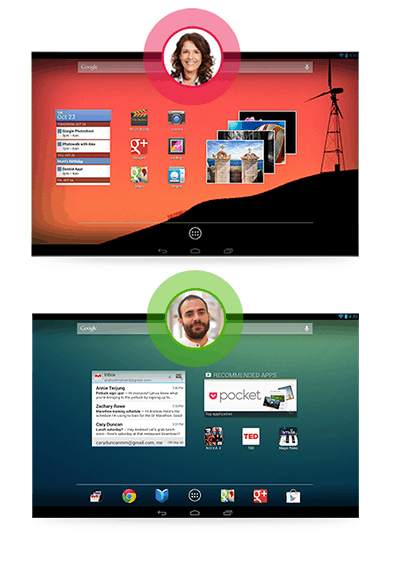 We talked about this not too long ago on our podcast and low and behold, Google has done it! Google Now will be even better than it was before.  Not only will you get weather and travel information, but you can also see popular photo spots, or even track a package. The possibilities! Want information on an upcoming movie? Google Now has you covered!  Check out the video below!

There are so many new features I can’t cover them all, you will have to go read for yourself, but these are just a few of the new features that will be incorporated into Android 4.2!  We are interested to know what the Android Community thinks about Android 4.2. Is it everything you had hoped for?

Enjoy the new flavor of Jellybean!