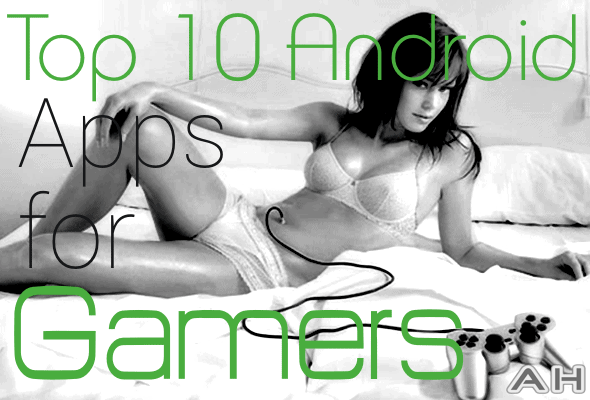 Gaming is a lot bigger than it ever has been. That’s a phrase that people band around all the time and for those of us that are heavy gamers we might not have noticed. If you take a look around, gaming has become more casual and at the same time a competitive sport. For this Top 10 roundup I’m going to go through the Top 10 apps for gamers out there. I’m not talking games or emulators I’m talking about tools that can help us in our game, help connect with friends or just keep us up-to-date. Come join me as I run through the best apps for gamers on Android!

We all need to get our hands on news and when it comes to gaming, you need to know what’s coming out, what’s been updated and what’s on sale. With Appy Gamer you can get all of this and the best thing is that it’s done it all for you and if you’re someone that has one of every current console out there then this is for you as it covers all the major formats. You should never miss a release date again thanks to this.

Often when we think of gaming we turn to the two biggest consoles out there at the moment and they are, of course, the Xbox 360 and the PlayStation 3. With brilliant exclusive games like Killzone on the PS3 and Halo for the 360 it’s difficult to choose between the two. If you couldn’t make the decision and bought one of each then this is the app for you. You can sign into both PlayStation Network as well as Xbox Live. Features vary upon either service but, it looks like Xbox Live has more functionality with this app. This is a great and clean way to keep all your gaming friends organised.

These guys have been at it for years and they’ve amassed serious amounts of content – some of it just appears out of nowhere. Which is brilliant because that game you though nobody had heard off and you wanna is any good? IGN will more than likely have some info on it and a rating. It’s also quite quick so, getting hold of reviews and ratings on the go is real easy, staring down the barrel of a game sale can be a hard thing at times and with this app you can get expert advice on what to buy and what not to buy.

This one right here is for big Android gamers. Nvidia marketed their Tegra Zone as the best thing in mobile gaming however, it’s barely lived up to that promise. In fact, Qualcomm and Sony have managed to secure more exclusive releases than the Tegra Zone. However, it’s still a great place to go if you just want games, all of the games here should support extended effects for Tegra devices and as long as you have Tegra 2 at least, you’ll be good to go with this. Exclusivity is a hard thing to make successful however, if there was anyone that could do, you’d have thought it was Nvidia. It’s disappointing to still be without a Steam for Android.

In these times of high-fidelity gaming and PC gaming againg pushing the envelope it’s hard to forget just how much fun the 8-bit and 16-bit classics of the day really were. Sure, they look pretty poor by today’s standard but, they still have their charm and if you’re anything like me, you can’t resist a good few minutes on Super Mario Bros. 3. The orginal. There are a whole lot of emulators out there but, we’re not going to go into that – maybe another list? – Gameshelf brings all of your retro games together in one place, stylishly for you to play all from one place. We recently featured Gameshelf in these month’s top apps!

In the life of a gamer, headshots really hurt but, you can’t resist watching that killcam back to respect a good kill. For the last couple of years people have wanted to see people play games and have started to respect skill a whole lot more than they ever did. To this end, with TwitchTV you can go ahead and watch as much as you like from the TV-like channel all about gaming. With their Android app you can get hold of video streams over 3G or WiFi, perfect for catching some StarCraft II on the way to work. There’s a good variety of games on offer and, nobody gets good on their own so, why not see how the pros play?

It’s nice to have an official app for something because, you can – or should be able to – trust the source. With Sony’s official app for their PlayStation Network you can sign into your account and check up on the latest news and game releases. However, it’s not really that good, it’s probably the safest option for PSN but going on how secure Sony is from the past I wouldn’t count on anything. It seems as though Sony don’t want people connecting to PSN on Android so, Sony, if you’re listening – give us a proper app already!

G4TV.com have been around a while now and their official app offering offers some solid content across the board. The application itself is up-to-date, speedy and has a lot of content to get through. There’s videos on upcoming games and trailers as well quick and easy access to tips and tricks on how to beat difficult games. Let’s not forget that you can also watch Attack of The Show here so, knock yourself out!

PC gaming took a bit of a hit when consoles really took off and if there’s one thing that helped bring the PC back up is Steam. Not only has it done wonders for our wallets though brilliant sales it’s revolutionised distribution of games on the PC platform. It’s also coming to Linux which, as an Ubuntu user makes me very happy to hear. With the app for Android you can talk to your Steam friends and, more importantly, you’ll never miss another sale again – hopefully. Enjoy!

It somewhat pains me to put this app at the top of the list but, realistically, it’s the best tool for gamers on Android. With Xbox being more popular than PlayStation there’s good chances many of you spend most of your time gaming on there. You can control a whole lot of your Xbox profile from the app – you can change your avatar, message friends to arrange games and track those important achievements. As much as I dislike seeing Metro on Android, this is the closest you’ll get to the Xbox Dashboard on Android. Nowadays I’m sure we all have a lot of friends that we contact through gaming primarily and with this you can message to your heart’s content. Now if only we could get some Xbox games on Android….