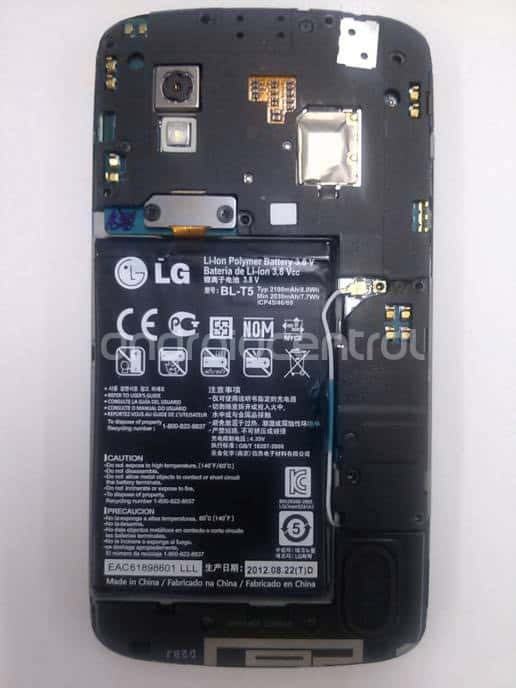 Behold! my fellow Nexus lovers and True Android enthusiasts, we bring you the latest image of the insides of the upcoming alleged, LG Nexus 4, courtesy of Android Central. Have you been beating your head on a wall for Google's decision to go with LG instead of Samsung for the next Nexus phone? Me too but we'll have to agree that the Nexus 4 looks sexy to be honest. Today,folks over at Android Central have gotten their hands on an image of the Nexus 4 without the Glossy back cover. Even though the back cover is intended to be non-removable but that wouldn't stop real tech-enthusiasts from tearing it apart, would it?

What you see above is the naked image of the LG Nexus 4, you can see clearly that the phone sports a 2100mAh battery same as the Galaxy S3 but this one is non-removable unlike the GS3. Everything else is the same as we've already heard about the phone so far. An 8 megapixel rear camera with LED flash and the cut outs for the speaker as well. If you have already forgotten about the rumored specs of the device then let me refresh your memory. The Nexus 4 comes with mouth watering specs.

That's all we know about the device so far and for more details you can check out our extensive post about the device. The LG Nexus 4 is coming soon and we know that, it is expected to be announced at Google's coming event in NYC. Hopefully, we'll be covering the event and bring you the latest news about the Nexus 4 and any other devices that Google plans to out at the event.