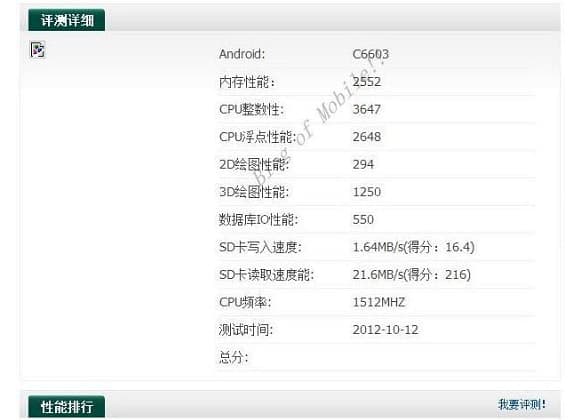 Previously we heard rumors about the upcoming Sony flagship for 2013 known as C650X "Odin". However, today we have more rumors about another Sony phone that has higher model number than the Odin, C660X codenamed "Yuga".

The Yuga has made an appearance in the AnTuTu benchmarks and shows some inside details about the phone. AnTuTu shows that the phone is running Android Jelly Bean 4.1.1 and powered by a Quad-Core Snapdragon S4 chip clocked at 1.5Ghz, pretty similar to the Odin. The same chipset is used in the Odin as well, so we can only assume that this may be the variant of the said device or just a sibling but there are no official confirmations. The Yuga scored total of 11,321 in the benchmark results that is better than the Odin's benchmark results and slightly less than the Optimus G's results. The GPU results of the Yuga and the Optimus G are almost similar thus we can safely assume that it's also packing an Adreno 320 GPU same as the Optimus G.

The numbers may be different from the Odin but the hardware is identical looks like Sony is preparing two new flagship phones for the coming year. Rumors are coming in fast now, so we'll get more info about the devices pretty soon till then stay tuned.