There’s going to be a lot of this running up to Google’s open Playground event next Monday and whilst we’ve already had one big leak in the form of the Nexus 4 pre-order page, we’ve already gotten another juicy leak. We’ve heard a lot about a Nexus 10 tablet ever since it’s smaller brother was released in the summer but, it was all just rumor however, in the last couple weeks we’ve been hearing ever more about the mystery tablet. Now, two pictures have surfaced from a Korean website, Seeko, that reveal a Quick Start Guide for the Nexus 10 tablet.

There’s little new that comes with this leak however, it does confirm that it’s built by Samsung thanks to the sketch in the booklet with the “Samsung” logo stamped just under the Nexus logo. As well as this, the booklet details features on any other 10-inch tablet, the usual array of switches and a front-facing cameras as well as a camera on the rear of the device that we didn’t see with the Nexus 7, complete with flash. There’s also an LED on the front which could well be akin to that of the LED on the Galaxy Nexus. 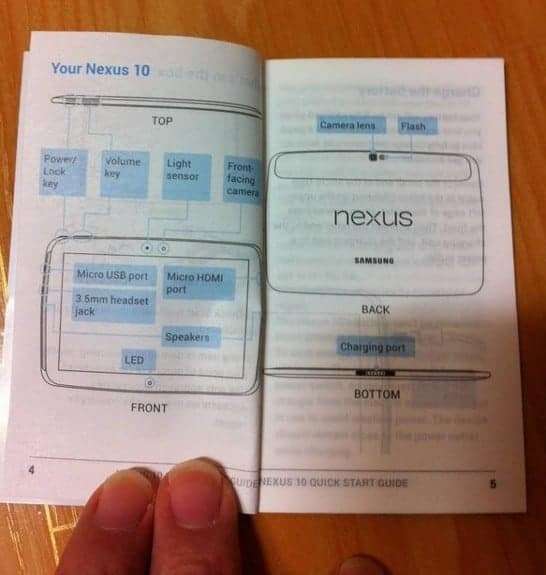 There are no specs confirmed for the tablet but, from we’ve been hearing this could well become the Samsung tablet that packs a wonderful 2560×1600 display and a quad-core Exynos 5250. Both of which would make a compelling tablet, Android or otherwise.

It’s not clear whether or not these images are legit or not but, with the event so close now it’d be pretty stupid for someone to try and fake something like this and it doesn’t appear to be photoshopped in any way. It’s exciting to see that we’re more than likely to see Google bring more hardware than ever before carrying the Nexus brand. If we don’t get any more leaks we’ll be ready and waiting with all the news come October 29th.