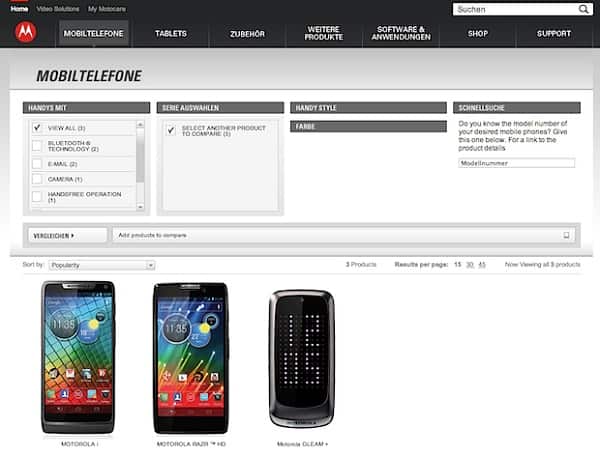 Do you want to buy a new Motorola smartphone or tablet? Well, tough luck for you if you're living in Germany because apparently Motorola has pulled most if not all of its devices from the German market, all thanks to the Microsoft's patent fight against Motorola.

At the moment you will only find 3 Motorola devices up for sale in Germany both online and at brick & mortar stores, these include RAZR HD, RAZR i, and Moto Gleam+. All other devices including whole line-up of Android tablets has been withdrawn from the German soil. According to the statement of a Motorola PR, pulling out devices has given the company time to fix the software and hardware that are infringing any rights. No word on when the devices will be back in stock.

We don't know how bad it is for the company to pull out almost all of its devices from a market instantly, it is definitely embarrassing for a company owned by Google. Motorola has recently lost patent battles against both Apple and Microsoft in Germany thus forcing them to withdraw most of their devices and rework them to make sure no more patents are infringed.

Nonetheless, Both recent flagships RAZR HD and RAZR i are available on the Motorola Germany website. These are very exciting smartphones offered by Motorola with solid specs but do you think only these 2 devices can carry the company forward in the German market? What do you think about this sudden move in German market by Moto? Enlighten us with your opinions.