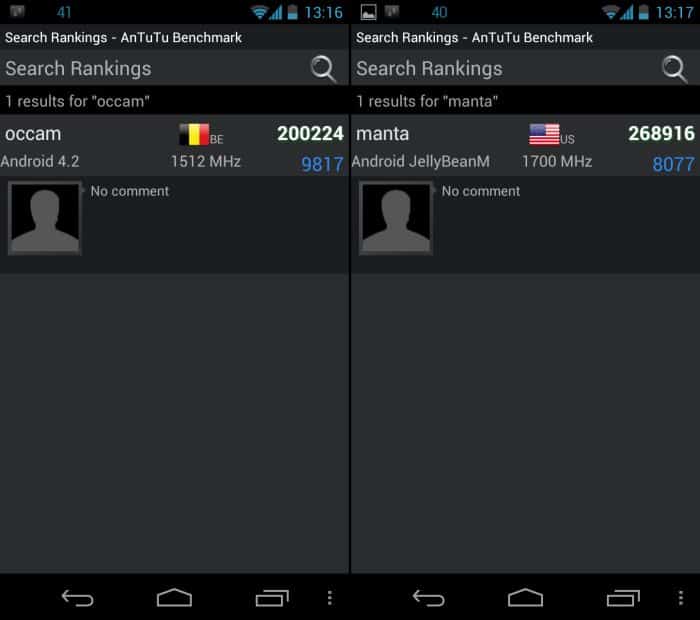 There have been plenty of rumors swirling around this week about the possibility of upcoming Motorola Nexus devices running Android 4.2, and a few screenshots from the AnTuTu benchmark database give those rumors much more credibility.

The Nexus devices in question are named "Occam" and "Manta," and at least the Occam is already running Android 4.2 Key Lime Pie. Manta, on the other hand, is running a custom Motorola Jelly Bean (Android 4.1) build named "Android JellyBeanM."

The Occam smartphone (as in Occam's Razor / RAZR) shapes up with the following specs according to the AnTuTu Benchmark database of devices:

The overall score of the Manta tablet is not as high, but the CPU scores are impressive.

Given their scores, both devices could be using Qualcomm's Snapdragon S4 processors, the same processors Motorola is using in the RAZR M and RAZR HD.

Motorola is known for using codenames, so at least the tablet could be called something else by the time it reaches market. For example, the XOOM went by "Stingray" and the "Wingray" for a Wi-Fi model during the development phases.

If the last three releases of Android updates are any indication, new Android releases only come out with new Nexus devices. If Motorola already has an Android 4.2 device, they may be ready to launch a Nexus device of their own. LG is already working on a Nexus phone based on the Optimus G, so the evidence is mounting that all manufacturers will have the opportunity to release their own Nexus devices as long as they meet the rumored Nexus program's requirements.

Just a note: this time of year things can be faked so take every thing with a grain of salt till we have hard cold facts!