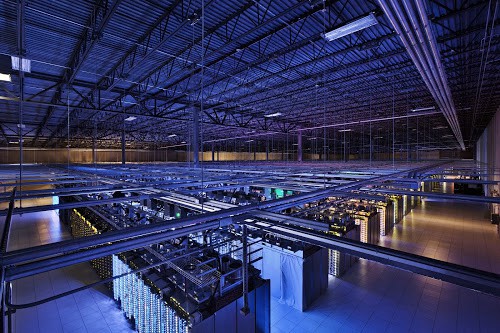 Google has opened the doors to its data centers, though not literally but virtually via Street View. The new features is dubbed as “Where the internet lives” and it shows Google’s giant data centers filled with thousands of servers and looks like a scene from a Sci-Fi movie. Photographer Connie Zhou was given access to the data centers to snap some awe-inspiring photos of the hardware and people responsible for controlling and maintaining it. Google says that “Our first priority is the privacy and security of your data, and we go to great lengths to protect it, keeping our sites under close guard” thus you can only visit the data centers virtually via the Internet, sadly but that’s the safest way to ensure your data doesn’t fall into wrong hands.

The virtual tour is divided into three different categories – tech, people and places, not much of technical details have been provided in it but still the eye-catching scenery of rack upon rack of cutting edge technology is a must see. The photographer wasn’t the only one to wander the giant data centers alone but Wired’s Steven Levy was also given the same opportunity to roam around the large room filled with the Internet’s Soul. This is what he had to say about Google and how it provides Data to its users.

“It would be slow and burdensome to have millions of people grabbing videos from Google’s few data centers. So Google installs its own server racks in various outposts of its networkâ€”mini data centers, sometimes connected directly to ISPs like Comcast or AT&Tâ€”and stuffs them with popular videos. That means that if you stream, say, a Carly Rae Jepsen video, you probably aren’t getting it from Lenoir or the Dalles but from some colo just a few miles from where you are”

Curious? So, head over to the official page and enjoy the brilliance all by yourself. We recommend something to eat and drink because you will be taking the tour for a while. Do let us know how you like/dislike The search giant’s Data centers.