We here at Android Headlines are all excited for the upcoming Nexus 10, or at least I am. I love my Nexus 7, and the Nexus 10 can only be greater and I can't wait until my finances allow me to have such a piece of art. Since the rumors started to fly,  the community has asked for benchmark results and  they have been answered. Today benchmark results were given out based on SunSpider and BLBenchmark. They should be exactly what everyone thought they would be, if not, I"m not sure how to console you at this moment.

The Nexus 10 is said to be sporting the Samsung Exynos 5250 processor with a Mali-T604 GPU. Please keep in mind that these test results also may contain software that may not be on the final product, which could affect the benchmark scores slightly. First, we have SunSpider where the Nexus 10 scored a 1370 ms. This score puts the Nexus 10 well over the Galaxy SIII and LG Optimus G. 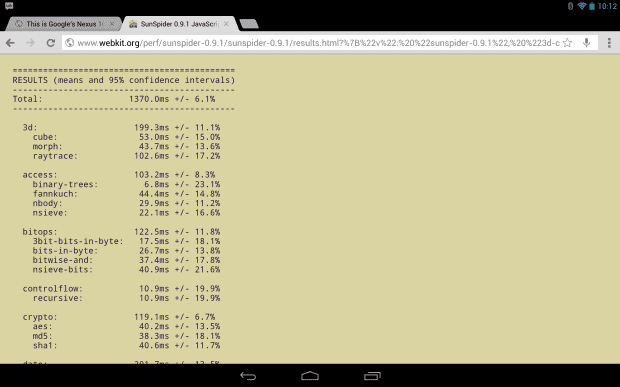 When it comes to GLBenchmark score, it was very similar to the Snapdragon S4 Pro. However, the S4 outperformed the Nexus 10 processor at times, which for some may be sad and disappointing to hear. However, remember these are LEAKS,  which mean nothing is set in stone until we have the actual device to test.

The Nexus 10 is also said to be using Android 4.2 and contain multiple user support, but we won't make any positive assumptions until release, right? Let us hope that this device is as great as it's partner the Nexus 7!!!

Is anyone else as excited as I am for the Nexus 10?