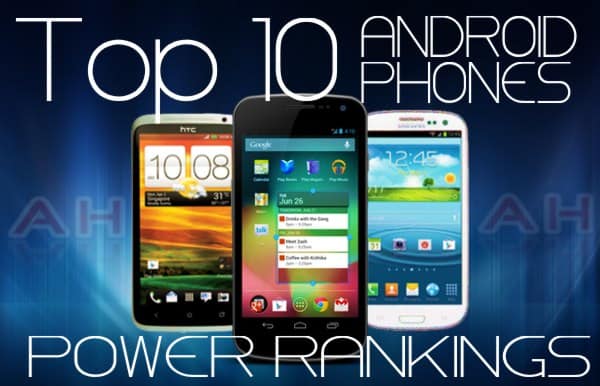 Looking to buy a New Android Phone or see how your current phone stacks-up against the ever more powerful competition?

Every month we rank the Top 10 Android Smartphones on the martket.Our rankings are based on several factors: Age of the Device, Hardware Specifications, Android Version and of course, Sales. We're not going to be featuring the new phones announced from Motorola or any phones that haven't been released so look for them when they've been released into the wilds.

So, let's get this show started shall we?

The second generation of the Galaxy line might be getting a little old now but that certainly doesn't mean it's ready for retirement just yet. Many of you out there will still be using an SII in some form or another and there's good reason – it's been updated to Ice Cream Sandwich which, at this point isn't something we can say about every device now is it? It's also got a pretty big development following from both AOKP and the masters over at CyanogenMod so I doubt the phone will be going out of date any time soon. With rumors swirling of T-Mobile proving the phone for $399 without a contract it could be an option for those limiting their outgoings.

HTC's One Series has been doing pretty well but it's clear that the star of the show is the One X, leaving the One S out in the cold. There's nothing wrong with the One S but questionable choices on HTC's part – like a low resolution screen – made it seem as if the One S was solely for those who didn't want a larger phone not those who wanted the best of both worlds. The One S is available from T-Mobile and whilst there's no 4G the speeds won't kill you either. It's a well designed phone as well, it's just a shame about that screen.

The RAZR was a popular feature-phone back in the day and was the phone that the iPhone had to beat in order to call itself a success. Fast-forward to today and the RAZR is very much alive and kicking – as it has been since last year. Whilst the design is becoming a little tired only because of Moto's unwillingness to let go and create something new the phone still looks nice and is certainly a quality piece of hardware if you're looking for a phone as thin as a…razor.

Whether or not it's a Motorola problem or that Verizon pretty much forced them to make more models I don't know but, it certainly seems that Moto and Big Red are going to be milking the Droid RAZR just like they did the original all those years ago. Which is a real shame because instead of making new phones they're just making a rehash of the phone before it. This particular model is the same as the above RAZR only it comes with a much larger battery. Giving the RAZR MAXX the ability to go all day without a charge, something the original apparently struggled with. Of course, with a bigger battery comes more thickness but, the phone still has a relatively thin profile.

One of the biggest phones on the market makes the Galaxy Note a strange contender for the title and whilst it's recently been superseded by the Note II it's still got some go left in it. We'd love to feature the new note in this list but it's not out there for you to buy so it'd be a little unfair wouldn't it? The Original Note, being a crazy thin phone and coming with S-Pen technology to feel like you're writing on paper instead of with a spongy rubber thing. There's a good development following for the device as well so you custom ROM folks won't be disappointed. How long AT&T will be selling the deice for is unknown as well at this point but, expect a price drop soon. 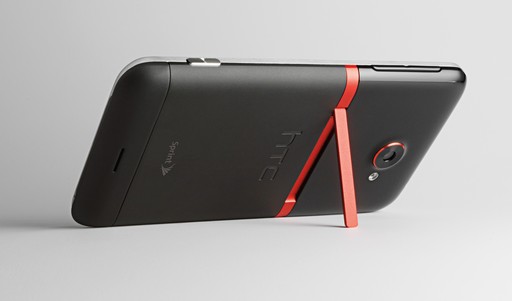 Ah, the venerable EVO line, it's been Sprint's flagship line for some time now and we were all wondering what the carrier would do with the new One Series and this is what they came up with. It's been on sale some time now and it's a pretty formidable device, with a design that differs from the One Series altogether – which is a shame as the One X is a pretty phone. What the EVO 4G LTE gains from being a little different from the One Series is a microSD card slot as well as the return of the kickstand – something I miss sorely being in the UK.

The Nexus line has only gotten better and better since it first launched years ago and now you can get a Nexus phone on Big Red as well Sprint – not to mention the GSM carrier unlocked straight from Google for $349. Unfortunately, this time around the Nexus on Verizon and Sprint isn't quite a Nexus with people still waiting for Jelly Bean on both networks however, with it being a Nexus, it's got a massive development community and so, you won't be disappointed when you come to unlocking that bootloader.

There's definitely something to be said of the One X's industrial design and I'd say that it's beautiful. AT&T are the exclusive carrier of the One X in it's pure unadulterated One Series dressing. This is essentially the same phone I'm enjoying here in the UK however, there's LTE and with that comes the Snapdragon S4 yet again. It's a hair thicker than the international version thanks to it's slightly larger battery for the LTE speeds but it's still a well crafted phone that is both thin and looks good.

It's been a long time since Motorola have had a successful looking device for Sprint's network but it looks like they've finally managed to bring one to market and I wouldn't be surprised if Google had something to do with it. This is going to be appealing to those that have been looking for a QWERTY keyboard on Sprint ever since the Epic 4G first launched some time ago as finally they've brought a DROID looking device to the other CDMA carrier. Unfortunately, the hard keyboard comes with some trade offs but I don't think this the phone that those looking for the upmost powerful phone.

Samsung seem to have hit on the head with the Galaxy SIII and even though the company are in the press for so-called copying this hasn't stopped the Galaxy S juggernaut. The latest and greatest in the line comes with all the modern advancements but without any compromise and they've done something that we used to think was unthinkable – launching on all four major carriers within a couple weeks of each other. Without having to drastically change the phone. Which when you think about it really is impressive, time and time again we've seen carriers have their way with devices but Samsung has stuck to their guns with this launch. The phone recently just sold 20 Million units worldwide in less than 100 days.


Advertisement
Trusted By Millions
Independent, Expert Android News You Can Trust, Since 2010
Publishing More Android Than Anyone Else
25
Today
144
This Week
399
This Month
5143
This Year
106618
All Time
Advertisement