There's something to be said about real-time strategy games – you either love them or hate them but, then there's also some others out there that like the idea of a good strategy game. I'll admit to having been the third option for some time however, I've recently been playing a lot more of these games. I'm a big fan of the Civilisation series but, I must admit that if I didn't put the time into these games I'd think that they were boring as sin. You can't tell me that a strategy games are all that exciting – because they're not. However, I'm certain that Nevosoft have managed to develop a strategy game that is not only appealing to all but fun as well. Read on to find out why.

Description: Landgrabbers is the latest from Nevosoft – we've reviewed some of their games in the past – and it's all about well, landgrabbing. More seriously though, Landgrabbers is a game that is solely based around building up a military force not to be reckoned with. You'll have to tactfully negotiate the specially designed maps in order to complete objectives and you'll be doing so in a variety of locations. Nevosoft have done a great job of creating a variety of battlegrounds all the way from the desert to an iceberg. 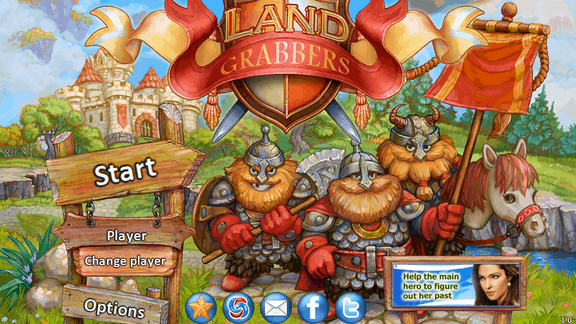 How It Works: It's a simple game to into to but it's a difficult game to master. To get the game up and running all you've got to do is to install the game from the Play Store and then install 50MB of additional files. After that, you're free to get conquering and to master the world. 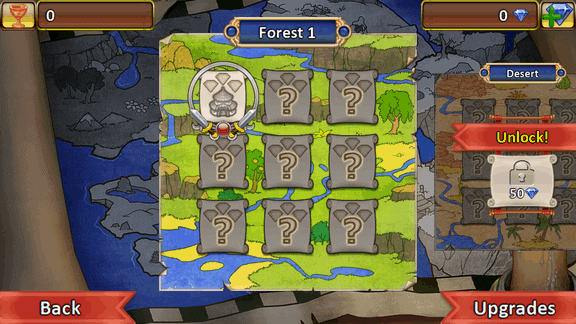 When you first load up the game you'll be asked which area to play and of course, you start off on a simple level, this time in the Forest. The game will present you with hints as you go on however it's easy to get started. You're presented with a map of the Forest with your barracks as well as the enemies – yours are in red. In order to attack you have to touch whichever barracks you'd like to attack from and then touch the opposing barracks you'd like to attack. 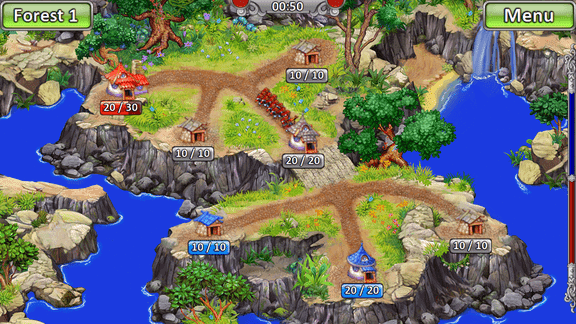 You'll notice that each barracks has a number on it – such as 20/20 – this represents how many soldiers you have in each and will diminish when you attack somewhere else or if you re-enforce another barracks. 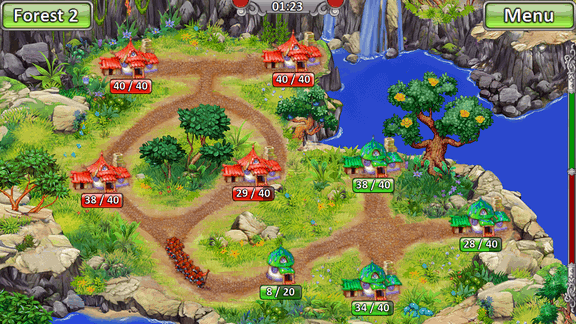 To upgrade a barrack you have to touch on one with a red arrow pointing upwards, this will increase the size of soldiers in it as well as change its appearance. Upgrading your battlefield is important as you can use other barracks to re-enforce others by tapping on one and then double-tapping another. Which is great to quickly restock a barrack after an attack. 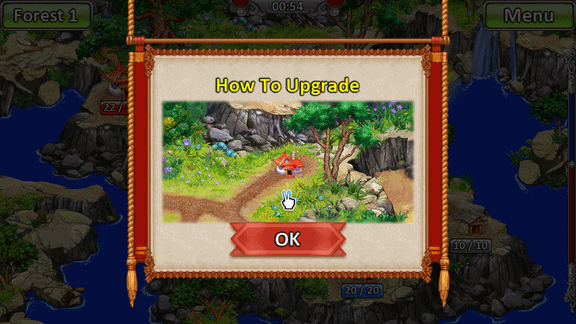 In order to attack with more than one barrack simply touch each one in turn and then touch which opposing building you'd like to attack. The game gets better and with it, more difficult. Remember, being quick is best and you can also upgrade and re-enforce buildings whilst attacking others.

Opinion: I've really enjoyed this latest offering from Nevosoft and for the first time I've enjoyed a strategy game on a touch based device. Too often I emphasize strategy games being mouse and keyboard affairs and every single strategy game I've played on a mobile device has always been pretty poor. Landgrabbers however makes for a perfect mobile strategy game. Thanks to it's fun setting as well as the requirement that you do things quickly – nobody likes to hang around anymore. The game's pace is perfectly


Conclusion: Even if you're not that big a fan of strategy games I sincerely emplore you to give this one a go. Even if you've played some Nevosoft's other offerings and didn't find something you liked then this is one to try! Strategy games are often tedious and difficult to find appealing however, Nevosoft have managed to deliver a fun and engaging experience that will have you glued to your phone for some time to come and if you haven't already go and install from the Play Store now!