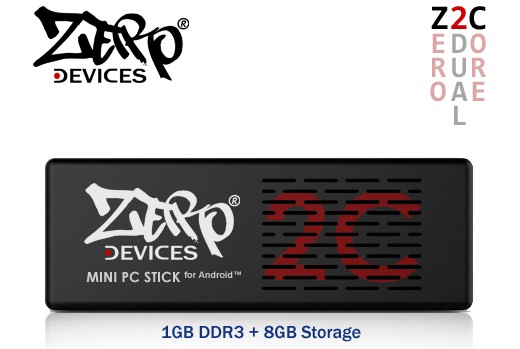 Mini PCs are nothing new to the World, especially ones powered by Android. We've covered a number of different devices from USB sticks to the ViewSonic Android Smart Display. As technology gets smaller, cheaper, and faster, so does the devices. Speaking of mini PCs, we've seen most of them come equipped with rather lackluster specs, but enough to basically get the job done.

Typically a single core processor, maybe 512MB RAM, and a good enough GPU to stream 1080p video to a display. Now, there's a new contender in town that looks to leave the others in the dust. Called the Z2C, this USB stick sized device is made by a company called Zero Devices. It costs just $82 and according to the website, you can get a discount on bulk orders.

Simply plug in the USB stick to your HDTV and you're ready to go. The Z2C supports a wireless keyboard and mouse. Here's the specs:

Not bad for such a small device and it won't be too long before we see quad-core powered mini PCs. Instead of having to spend a couple grand or more for a TV with all sorts of cool functionality such as Internet browsing, gaming, Youtube, Netflix, etc., you can simply spend less than $100 for a device that offers all of that and plugs into your existing setup. Pretty dang enticing if you ask me.