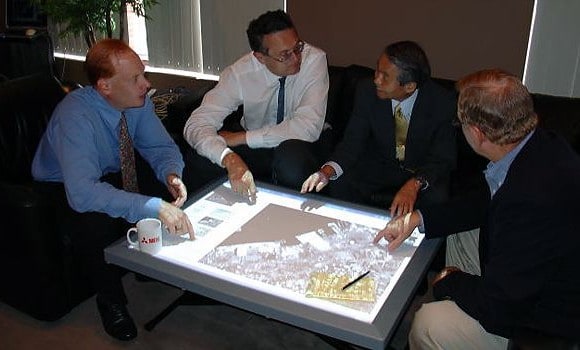 Apple has had the last two weeks to be on the offense and present their case against Samsung which, they claim, has infringed upon multiple patents of theirs which includes the design of the iPhone and iPad, and has also led them to lose Billions of dollars because of it. Now, the tables have turned and it's now Samsung's turn to present their case to the jury and Judge Lucy Koh.

At least in the beginning here, Samsung is setting out to show that Apple was not the first company to use their supposed patents which have caused a plethora of legal battles, even getting some devices banned for sale. Clearly the patent system is in need of some major reform and the South Korean company is wanting to show that because of prior art, Apple's patents should therefore not be valid.

One of the first things that Samsung talked about is the pinch-to-zoom patent. Their legal team brought out a touchscreen table that was built by Mitsubishi called "Diamond Touch", and was created many years before the iPhone and where pinch-to-zoom first appeared in Apple's products. What makes things a bit worse for Apple is that Adam Bogue, a Mitsubishi Engineer at the time, said that he had met with Apple engineers back in 2003 and showed them the touchscreen table.

This surely isn't the first of prior art that Samsung's legal team has up their sleeve. It'll be interesting to see what else is presented and just how deep we'll get into the rabbit hole. Here's a video below of the Diamond Touch that was shown in court. What do you think? Is Apple's pinch-to-zoom patent invalid?