Skip to content
Trusted By Millions
Independent, Expert Android News You Can Trust, Since 2010
Publishing More Android Than Anyone Else
18
Today
100
This Week
477
This Month
3748
This Year
113795
All Time LG Optimus 2X is the world’s first dual-core phone. It was the first phone to sport the Tegra 2 chip. However, when it comes to OS updates this phone hasn’t been much lucky. Stuck on the old Gingerbread OS for almost 2-years now. LG stated way back in 2011 that the Optimus 2X will receive ICS update but that never happened. After a while LG Canada tweeted that the Optimus 2X will never receive ICS, which one should we believe?

Today, LG Korea has tweeted something interesting once again providing the Optimus 2X users with some hope. The tweet reads that the Optimus 2X will receive the ICS update and the update is still in testing phase, as soon as the testing period is over the rollout will begin. You can check out the tweet below. You might want to brush up your Korean (or Koreanese, whatever!) before reading the tweet. 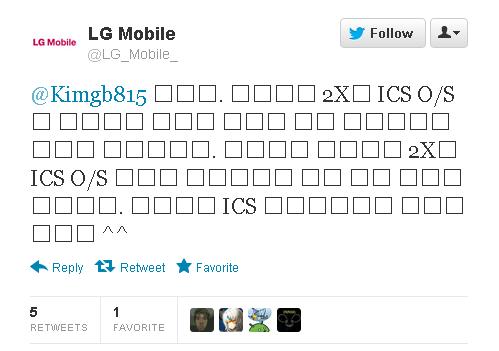 It clearly shows (if You understand those squares) that the ICS update is coming to the Optimus 2X and it’s already in the testing phase but we’re still not sure if this update will also hit US and other parts of the world as well. South Korea is surely going to taste some ICS love but what about other Optimus 2X users around the globe, still no official words from LG Mobile. Now that wouldn’t stop me from gathering info about the ICS update for other countries, so I tweeted to LG Mobile USA asking them if the update will be available to Optimus 2X in US and other countries as well, they replied with the following tweet.

Instead of shooting down my tweet with a clear “No”, they asked me to wait for more info. This is a good sign, they’re considering the Optimus 2X for an ICS update at least. Optimus 3D will also get an ICS update hopefully sooner than the 2X.