One feature that all tablets lack is the ability to create multiple-user accounts on a single tablet, just like Windows (or even Mac OS). Not a big deal for smartphones but when it comes to tablets than most families use a single tablet and bounce it back and forth between family members for personal usage, each of them wishing for a multi-user account support for privacy and arrangement of contents.

Well, look no further as hackers have found code in the latest Android iteration Jelly Bean that proves the fact that Google is working on bringing multiple-user accounts support to android and we might actually see it in the future releases of the OS (We have already reported that earlier). This function means that You, your wife/Gf, your kid and his/her nanny can have different accounts on the same device with each account tailored personally to suit the user’s taste. Developers over at XDA have actually found out that Jelly Bean already has the multi-user account support in its code and you can as well enable it (Check out the video below), but unfortunately it is not complete yet. (Come on Google!)

The multi-user account feature requires each user to put a unique password, pin, pattern or even use the face unlock feature for their personal account. This way each user will have access to their own layout, stored apps with data, wallpapers, icons, saved bookmarks and widgets, just like you would on a Windows PC. Multiple-User account is not an innovation in the field of technology as it has been available for decades in Windows but when it comes to tablets not even a single tab has it yet. (Yup! not even iPad). So, introducing this features in Android would definitely give android an edge over iOS as a more family-friendly enterprise. 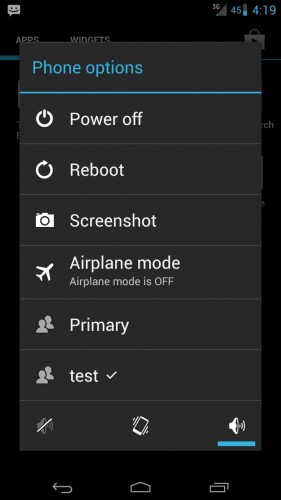 Check out the video below by one XDA developer (zanderman112) who shows off the steps to enable multiple user accounts on a device running Jelly Bean. (in this case a Galaxy S3). We wouldn’t recommend it though because it is not complete yet and it might cause glitches and bugs in your normal usage. If you’re feeling adventurous then watch the video below and head over to XDA Forums for more info on the feature.