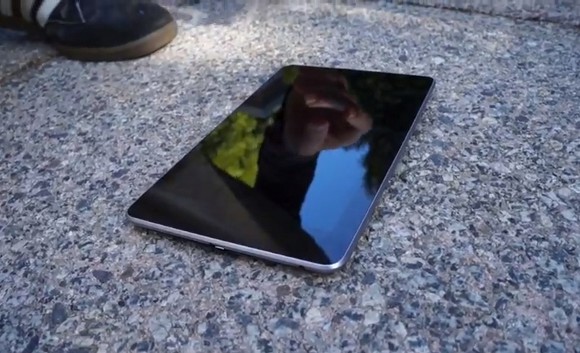 The Nexus 7 tablet from Google and ASUS has just started making its way out to pre-order customers and the time was just ticking until someone filmed a video of themselves dropped it on very abrasive concrete or pouring water on it. Well, that time has finally come. SquareTrade, the company that provides extended warranties for electronics, took it upon themselves to put the Nexus 7 through the paces.

They paired it up with the new iPad, the one featuring the new Retina display. Never is easy seeing such great devices being damaged and dropped, but it's all in the name of science, right? In the first test, they dropped both tablets at the same time from about chest height. The Nexus 7 managed to land on its back while the iPad dropped on a corner before landing on its back.

The screen on the Nexus was just fine and the back had just minor scuffs while the iPad's was scuffed pretty good on the one corner and the glass was cracked in that general area. Next, they slid both off of a small ledge about 3 1/2 feet high or so. Both tablets landed on a corner while the iPad landed on its screen and the Nexus didn't. Both had scuffs, but were still functional.

Lastly, SquareTrade got the idea to throw them both in a bathtub. Before doing so, they both had a video playing in Youtube. After being submerged for several seconds, both tablets still worked, but the audio stopped working on the iPad. The Nexus 7 still had audio. For a $199 tablet, it holds up quite well so rest assured if you drop it, you'll probably be okay. Unless of course you drop it off a building. Or down several flights of stairs.