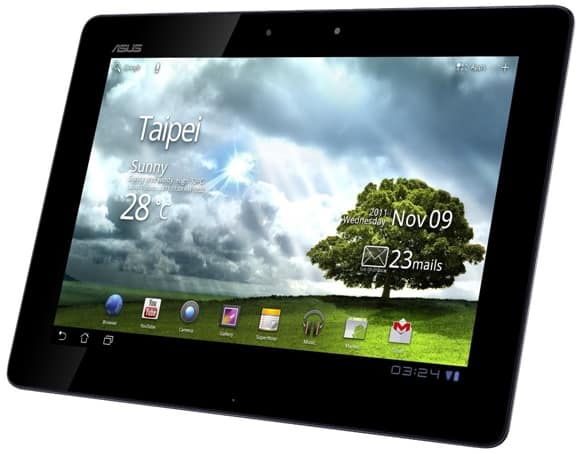 New monthly poll, same old result: the ASUS Transformer Prime sits at the top of our list. ASUS is the benchmark that all other Android based tablets are measured against. They hit a homerun with the original Transformer,  and they certainly didn't lose any ground with the introduction of the Transformer Prime. Beautiful screen, ICS out of the box and a quad core Tegra 3 processor are all features that you'll find on this tablet, and it's a pleasure to use to boot. The camera on the back of the Prime might be the best tablet shooter that you can get, but that front facing camera is weak, even for video chat.

Number 5 last month, number 2 this month, that was a fast march to the top. Strip down the Transformer Prime a bit, drop in a little lower quality screen and stick a slightly less powerful battery into the case and what do you get? The Transformer TF300, that's what. If $500 for a tablet is past your pain point, you simply can't go wrong if your budget will allow $400. The TF300 is best in the $400 class of tablets, it just had its votes spread around too much to rank any higher. ASUS could have gone 1, 2 in this month's vote, and I wouldn't be surprised if they did next month. 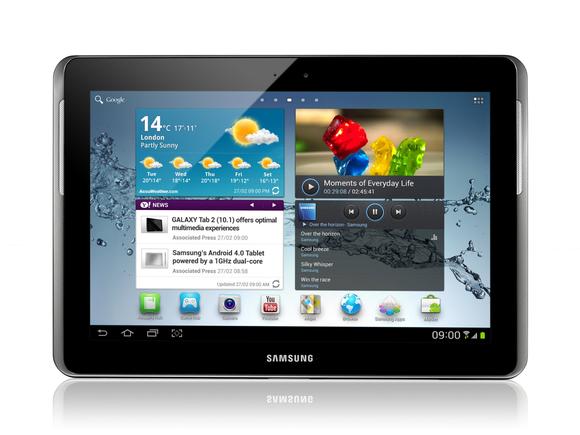 The next Galaxy Tab 10.1 is pretty much more of the same in the hardware category. Taking another page from Apple, Samsung chose more of a refresh for the Tab than the path that ASUS took for the Transformer, but it's still a very solid number 3 in the Android race. The Tegra 2 dual core processor is weak compared to number one, but that's not where the problems end. The rear camera has much lower resolution that the Prime, and it shows in every way, but video chat quality is better. The Galaxy Tab 10.1 will be eclipsed this year by the Galaxy Note 10.1, and the lack of attention to the Galaxy Tab 10.1 proves it.

The newly released A510 made quite a splash in our TOP 10 rankings last month, and if it works as well in the real world as it has in reviews it is one helluva grab. You won't be wowed by the design of this plain looking tablet, nor with the camera blow you away. What you will find is a very long battery life, a screen resolution that matches #1. The big downers to this tablet are the low pixel density and the screen itself. At less than 180 ppi this is no retina display challenger. 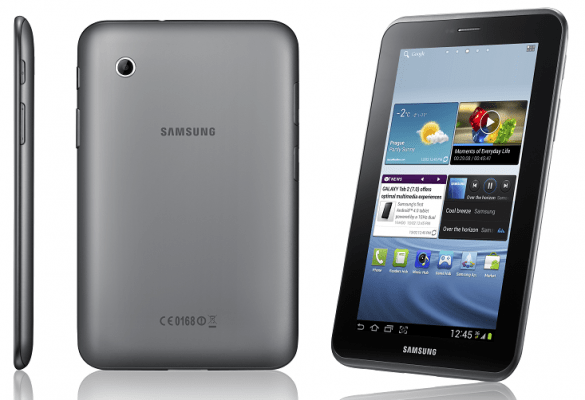 If you've seen one Galaxy Tab 2 model, you've pretty much seen them all. The Tab 2 7" model is another that offers only average specs and uninspired hardware design, but Sammy just continues to sell the hell out of them. You'll get an OK screen, and the device more than keeps things moving along smoothly. The battery size isn't as much of an issue on the 7.0 because there just isn't as much power consumption by the 7" screen. There's also a 7.7" version of this tablet that is available on the VZW network.

The world's thinnest tablet is how Toshiba is marketing this tablet, and this skinny Minny looks pretty good too. Looks aren't everything though, and Toshiba has priced this tablet about 30 bucks higher for the 16GB model than a similarly priced iPad, while the 32GB model comes in at the same price. For that premium you'll get an average display with a lower pixel density and shorter than claimed battery life, but you'll look good doing it. 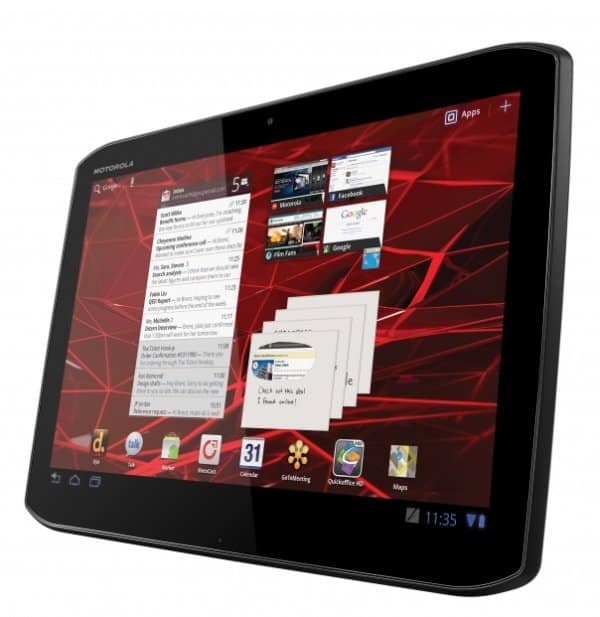 This is what happens when you let a carrier partner run all over you and name your products, you end up with a tablet named the Xyboard. I'm sorry, it's actually XYBOARD. The name might be a train wreck, but the owners of the Xoom 2 seem to like it. Having spent some time with the 8.9" version of this tablet, it was a very solid performer, but there's just not a lot to separate the XYBOARD from the pack. It has a very nice display, a dual core TI-OMAP processor and plenty of RAM. It's just a remarkably unremarkable device that happens to look pretty good and performs pretty well. Except for the camera, as that's a fairly typical Motorola letdown. 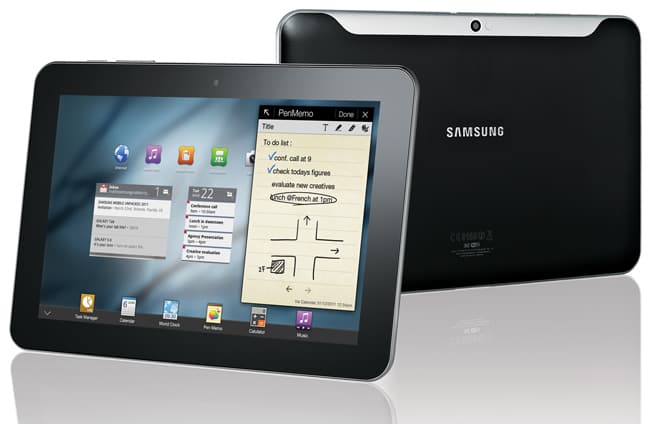 Kind of like the Galaxy Tab 10.1 before it, the 8.9 version received only a minor bump in specs but maintained the same price point. Given how many reviews have called this tablet "sluggish", I'm at a loss to explain this tablets popularity. That aside, it has a really nice screen and better than average battery life, though the camera on this device is a total letdown compared to other devices in the Sammy lineup. 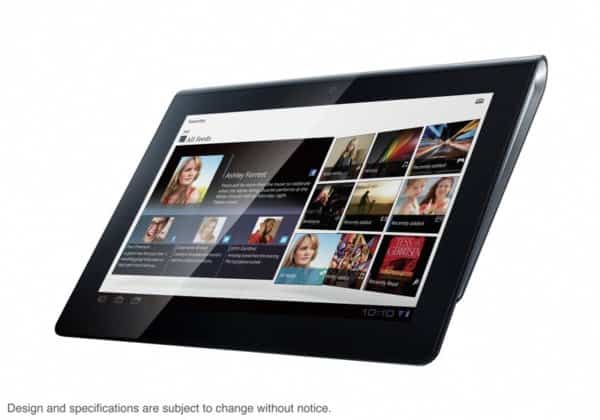 From the side view it looks more like a door stop than an Android tablet, but don't knock it until you've at least picked one up and held it in your hand. That unique, but odd wedge shape is actually really comfortable to hold, and makes laying the tablet in front of you on a table or desk a more pleasant experience. Spec wise, there's nothing here to get overly excited about. Tegra 2, 1GB RAM and Honeycomb are what Sony is offering here, pretty much just like everyone else. What Sony does offer that the others don't  is the Sony Entertainment Network, providing a streaming music service, video rentals and Crackle. And don't forget that the Tablet S has a built in universal remote control capabilities with built in IR. 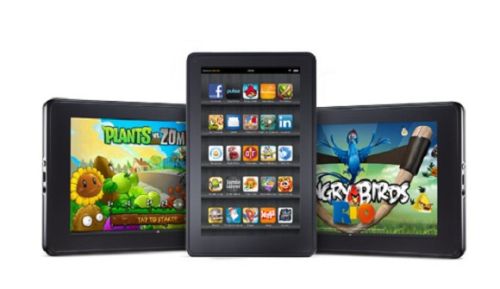 Seems like the Android tablet that really isn't has settled into a comfortable groove at the bottom of our list. Amazon doesn't market the Fire as an Android tablet, and in fact has totally distanced their fork of Gingerbread from its Android roots. The Fire isn't packing the best specs in its class, but Amazon clearly knows a thing or two about what people are willing to buy. The tablet lags a bit, looks just like a Blackberry Playbook and isn't running Honeycomb, but in the <$200 category it's a pretty solid choice. Oddly, the Fire doesn't have a camera at all, which makes scanning bar codes and searching by pictures in the Amazon app impossible.