Comments:This phone lands at the top of the list for the third month in a row because, well, it's the still the current Nexus device. It's the best overall Android experience of the moment, even if there are devices with better specs available now or coming soon (looking at you Galaxy S lll). If that's not enough to convince you, look at the bright, colourful Super AMOLED display with its 1280 x 800 resolution – sharp, but not as sharp as it could be because it's stretched over such a large screen. It's powered by a dual-core 1.2GHz processor and has 16GB of onboard memory . The front facing 2MP camera has higher resolution than most,  and  the main 8MP camera takes beautiful photos. Currently running Ice Cream Sandwich, it's hard to pass over the Galaxy Nexus if you're in the mood to buy a new device.

Comments: Talk about making an entrance, the HTC One X hits our list at the #2 spot on our list for the second month in a row, and some of our writers argued that it should have been #1. The HTC One X is a beautiful departure from the tried and true but tired old designs that HTC is famous for. It's a sleek, comfortable to hold device with a beautiful screen staring back at you. It does ship with ICS on board, but it's stuck with the new HTC "thinner over battery life" 1800mAh non-removable battery. The One X has reviewed very well so far and if the battery doesn't scare you off, this is a beautiful device to be stuck with for the life of your contract.

Comments: Moving back up to the spot that it held in our first poll is the Droid Razr Maxx. You really can't grasp how great this device is unless you stroll into a Verizon store and hold one in your hand. It has a very unique style, and it's a very nice phone to use.  It's powered by a dual-core 1.4GHz processor and has 16GB of storage with a microSD slot in tow. The front 2MP camera is nice for video chat while the rear 8MP camera delivers very good quality photos. It runs Android 2.3.6 Gingerbread but an update to Android 4 ICS is in the works.

Comments: Holding steady at the #4 ranking is the largest phone in the world. Just because it's gigantic, that doesn't mean it isn't a great device, because it is great.  The screen is bright and colourful thanks to the Super AMOLED technology and has a 1280 x 800 resolution – sharp but like the Nexus, not as sharp as it could be because it's stretched over the large screen. It's powered by a dual-core 1.4GHz processor and has 16GB of storage, plus a microSD card slot if you want more space. Again with the nice 2MP front camera and 8MP rear camera. It runs Android 2.3.6 Gingerbread with an Android 4 ICS update coming soon enough. Don't make fun of that stylus, it's really useful on this small tablet phone.

Comments: Proving that hyping up a device works like a charm, the HTC One S stole the #3 ranking on our list last month, but slid down a few spots for this list. Aside from the letdown of a screen that HTC put in this device, it's still the best phone that T-Mobile is selling right now. HTC's ImageSense technology really seems to be working, as the images that I've seen from this device are beautiful. The One S, like the One X before it has reviewed really well and has a lot going for it. It's just saddled with HTC Sense, a thinner profile thanks to the weak battery and that previously mentioned underwhelming screen.

Comments: Talk about coming back to life, the Droid Razr 4G drop back in our list in the #6 spot after taking last month off. Sort of just like the Droid Razr Maxx, only not so much. It has the nearly the same specs as the much higher ranked Razr Maxx with the same processor, the same impressive Super AMOLED screen, the same 16GB of storage and the same 1GB of RAM. It has the same camera that captures full 1080p video and and it runs Gingerbread. The Razr Maxx got a 3300mAh battery and this version, well, it's packing just better than half of that capacity. If you prefer the lower price of this phone, go for it. It has that Razr styling and hey, you can tell people it's a Maxx. If money isn't your first concern, go for the Razr Maxx.

Comments: Another victim of the HTC onslaught, the Galaxy SII fell out of the top 5 last month, and continues on its way out of our top 10. Some may not like this phone because of how similar it looks to other devices on the market, but even this old dog is still worthy of consideration. It has a bright, colorful 4.3" Super AMOLED screen powered by dual core 1.2GHz Cortex A9 processor. Samsung devices have pretty much always been at the front of the image quality pack and the 8MP read shooter on this phone takes great pictures. It packs the standard 16GB of storage and throws in that microSD slot for additional space. Battery life on this phone isn't bad and even though it might remind you of some other company's phone, it's still a winner.

Comments: I guess you can tell that we're starting to get down near the bottom of our top 10 list. Here's another phone that splashed back into our rankings after taking a month off. The Bionic was last year's often delayed supermodel Motorola phone in the iconic Droid line, and the waiting is the hardest part. The specs on this phone were really great when word started to filter out that it was coming, but by the time it finally showed up in stores it was just another phone. It can be had on the cheap and it's certainly no loser, but you can do a lot better. Time kills and the Bionic is the perfect example of it. 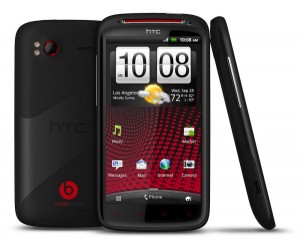 Comments: The Sensation may have slipped a couple of spots from last month, but it did manage to hold its lead over the LG Spectrum on its way down to the #9 ranking this month. One remark in our in-house poll said "nothing sensational about this phone", but it's actually nothing less than another solid device from HTC. It also looks just like every other solid device from HTC. The 1.2GHz dual core processor is speedy, and the 768MB of RAM seems to be more than enough for this device. The 4.3" S-LCD display actually comes in at an impressive 540×960 and a whopping 256ppi. It looks better in white than the standard HTC gray, but hey, this phone ships with a higher capacity battery than the HTC Thunderbolt did. If you can't hold out for the new HTC One series of devices this phone will do quite nicely, thank you very much.

Comments: The biggest loser in the HTC rush to the top over the last two months was the poor LG Spectrum. All jokes aside, this is the best phone that LG has ever produced. The screen is impressively bright and colourful thanks to the Super AMOLED technology and it's stretched 1280×800 resolution could be sharper, but is far from disappointing. It's powered by a dual core 1.4GHz processor and has 16GB of storage plus that microSD card slot. The front camera is a 2MP video chat cam while the rear is a good quality 8MP. It runs Android 2.3.6 Gingerbread but an Android 4 ICS update has been announced.

Buy the LG Spectrum 4G from our Amazon Wireless Store


Trusted By Millions
Independent, Expert Android News You Can Trust, Since 2010
Publishing More Android Than Anyone Else
23
Today
23
This Week
118
This Month
1963
This Year
103442
All Time
Advertisement