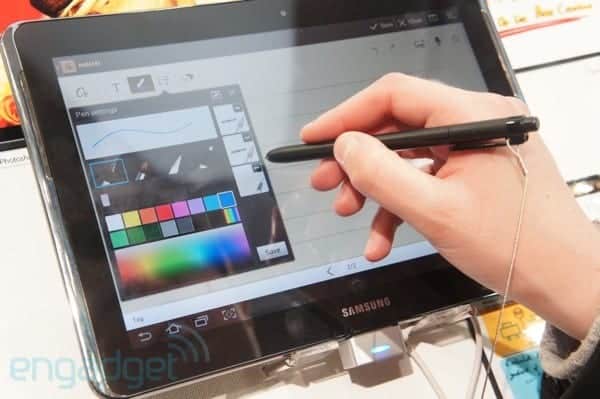 The Galaxy Note 10.1 is the Galaxy Note's big brother, with a 10.1" screen, and meant for those with a passion for drawing, or who prefer to take notes through handwriting. The device is not much different from the original Galaxy Tab 10.1 hardware wise, though.

Aside from the hardware which is much like the Galaxy Tab 10.1 from last year, you get the S-Pen which is great for drawing – much better than any other stylus for capacitive screens out there, because it has an active digitizer and it's also pressure sensitive. Plus, it gets a bunch of premium software that allows you to draw or take notes, edit pictures with the stylus, and so on.

The design and build of the Galaxy Note 10.1 seems to be much like the Galaxy Tab 10.1, too, except it has a pebble blue color and finish. Samsung hasn't tried to change their designs much since last year, but hopefully they are going to make more exciting ones for the upcoming high-resolution tablets with the powerful Exynos 5250 processor.

The Note 10.1 is mostly intended for people who love to draw and design, so specs are not the main priority. But I do hope we're going to see a high-resolution Note 10.1 version with a Cortex A15 processor by the end of the year.