The ASUS PadFone is one of the most interesting takes on a hybrid mobile device to date. The PadFone is an Android 4.0 powered smartphone, that can be placed inside a tablet dock and become a functional 10.1 inch Android tablet. ASUS took that idea even further by releasing an optional keyboard dock for the tablet screen turning the original phone into a clam shell Android laptop all powered by the smartphone. There is even a Bluetooth stylus that can function as an earpiece when the phone is docked. 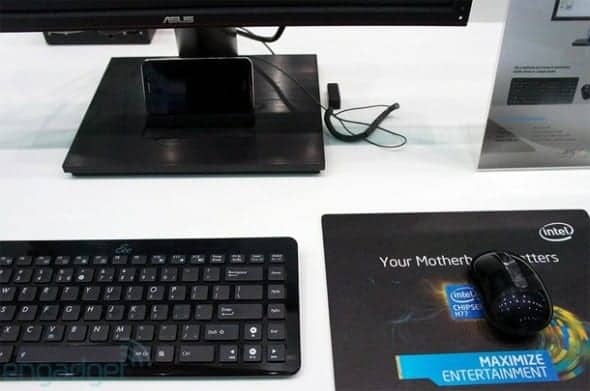 At Computex this week ASUS added another accessory to the PadFone line this time a 24" 1920×1200 resolution monitor. The phone docks into the base of the display as shown above and then turns into a sort of All In One PC running Android Ice Cream Sandwich. The display is not touch enabled and will require a short adjustment to using Android with a keyboard and mouse which turns out to be not hard at all. The monitor itself can used for other systems as well and comes with a variety of ports including HDMI,  VGA, DVI and four USB 3.0 and should be available in the U.S. though no time frame was given.

The idea of having your Android  smartphone powering a desktop experience is interesting no doubt. At this point I would say it would provide a better overall experience then Chrome OS and could prove valuable if explored further. What do you think of a 24" keyboard and mouse Android experience?