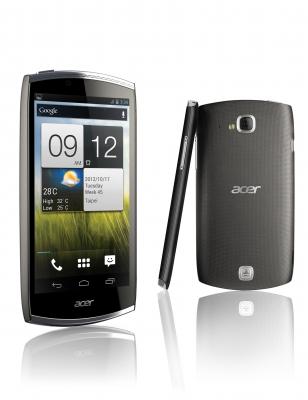 Acer seem to be heating up regarding new devices towards the middle of the year. With the A510 now on sale in the US and successors to the A200 and A100 tablets announced at Computex it looks like the company is looking to build a portfolio of devices for the second half of the year.

This time around it's the pair of smartphones that the company showed off earlier in the year way back at MWC. Acer's flagship model the CloudMobile S500 along with the lower-end aimed Liquid Glow are said to go on sale in September and next month, respectively. The CloudMobile generated a little bit of buzz for winning the IFA's Design Award and having a 4.3" IPS display with a lovely resolution of 1280×720. The CloudMobile is said to retail for â‚¬349 and alongside that gorgeous display you'll get 1GB of RAM, a dual-core 1.5Ghz processor and 8GB of storage as well as a microSD slot. The interesting thing about this is that 1.5Ghz processor is a Snapdragon S4 meaning europeans should be in for a treat towards the end of the year, with a UI that remains largely untouched. I can't wait.

The LiquidGlow is a phone that's more aimed towards the budget side of things and is a little less feature packed. It features a 3.7" display at a less than stellar WVGA resolution, a 1Ghz single-core processor, 5MP camera, 1GB of internal storage with a 4GB microSD card thrown in. The LiquidGlow will retail for â‚¬179 next month. Thankfully, both phones will be shipping with Android 4.0 as standard.

[Source: The Verge via Android France]