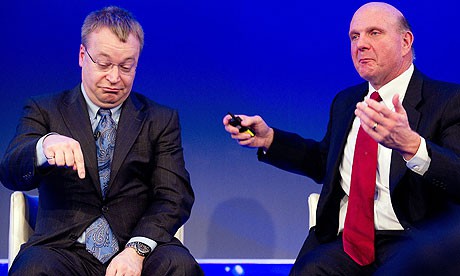 This is history in the making and also an end of an era – an era of 14 years in which Nokia dominated the world as the biggest phone manufacturer. From here on, that top position belongs to Samsung. I've realized this would happen about 2 years ago, when I started noticing how fast Samsung is growing and how fast they are catching up with Nokia (they used to have less than half Nokia's market share in the phone market).

But because of Android and because Nokia refused to adopt it or any other OS for a long time, and because then made things worse by announcing Symbian's death and adopting a mobile OS that was and still is unproven in the market, and betting the whole company on it just to please Microsoft, Nokia is literally getting exterminated in the phone market, one big chunk of market share at a time every year. They used to completely dominate in India, China and other such countries, and now they have less than 20% market share in all of them, and their market share and revenues are still in free fall.

Now, Samsung became the world's largest manufacturer, because they used Android early on and they took full advantage of it. They really tried hard to become the best Android manufacturer, and that has been obvious since the day they launched the first Galaxy S. Ever since they've improved more and more, and released better devices not only at the high-end but also at the low-end.

Some keep saying that Nokia becoming an Android manufacturer wouldn't have helped them much. But think about this. Samsung was still half of Nokia in the phone market when Nokia started considering whether to get Android or not. If they would've adopted it then, they would've still had plenty of opportunity to not only stop Samsung's growth, but stop bleeding revenues and market share themselves as well. Today, Nokia is at the lowest stock price in 15 years, it lost its 14 year lead as phone manufacturer, and its credit rating has just been downgraded to the "junk" status. It's really hard to argue that they wouldn't have done a lot better by adopting Android at the right time.

Plus, it keeps losing billions of dollars in revenue every quarter. At this point, Nokia is in free fall and headed towards banckruptcy. The WP7 sales are nowhere near enough to save them. Although the most likely scenario is that they will probably be bought out, either by Microsoft (although it's not guaranteed if they think Nokia is hopeless), Samsung or Huawei, who was also considering buying Motorola from Google.