We’ve kept hearing for years how Android is so much less efficient regarding battery life than an iPhone or an iPad, with the iPad getting the crown for battery life many times. But ever since iOS 5.0 things seem to have gone downhill for iOS and iDevices. The new iPhone and the new iPad have simply lost the crown for being the most efficient mobile devices. Now that crown gets taken by more and more Android devices every month.

We’ve had the Droid RAZR Maxx which gets crazy battery life as a phone, double as any phone out there, and still owns the crown for everything else. Now we have the Galaxy Tab 7.7 that with a measly 5,100 mAh battery (for a tablet – most have 7,000 mAh), it can get a lot better battery life than the new iPad and also than any other other tablet out there. 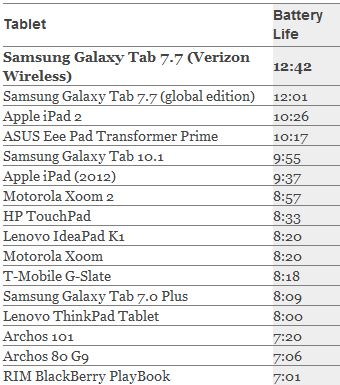 Plus, there’s an even bigger disadvantage to having such a huge battery, and that’s weight. The new iPad weighs 652 grams, while the Galaxy Tab 7.7 weighs only half as much at 340grams, which is only about 50 grams heavier than an e-ink Kindle. This means the Galaxy Tab 7.7 is a lot better for reading books on it than an iPad, because it feels much more comfortable in hand, and you can hold it for hours at a time.

I expect Samsung to continue to use whatever technology they are using to have such amazing battery life in upcoming devices, including the Galaxy S3, and that rumored 11.6″ next-gen tablet. They even said a few months ago that this year they will show devices with all-day battery life, so we should look forward to more such crazy efficient devices from Samsung this year.