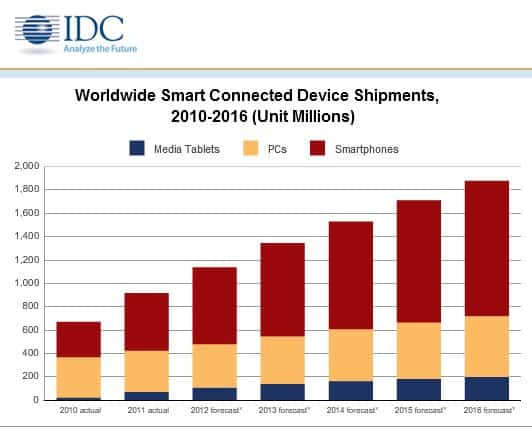 But here's why I think this is a very safe prediction. First, IDC is known for making such safe predictions about Android. They've made them before about how Android will only get 30% market share around 2014. It took only a year later for Android to reach that goal, at the end of 2010. Then, they also said that Android will barely reach 46% market share by the end of 2015. Again, it reached it at 50% only a year later.

It seems to me that by now IDC would get a clue that their "4 year predictions" regarding Android are really just "1 year predictions", because Android keeps busting through that 4-year goal in just one year. And surprise surprise, I believe Android will once again beat Windows's growth in only a year.

Android already activates 850,000 devices per day, and without even counting any other increases, Android should activate around 300 million new devices this year. If you count some increases in activation as well (I believe it will pass 1-1.2 million per day by the end of the year), then you're looking at 350-400 million units, this year alone.

It took Windows 7 almost 2 years to reach that goal, and it was the fastest sold Windows in history, and the most expected OS of the decade, because people were already very tired of XP, and were frustrated with Vista. So once again, IDC will be proved wrong, and will have to do a revision next year of their prediction.

One thing I'd really like to see is Google starting to focus a lot more on tablets, and on hybrid devices like the Transformer Prime. Google has a real shot at the laptop market as well, if only they make it standardized enough to run on many different devices, and if they optimized the interface a bit more to be better not just for tablets but also for the laptop form factor. And from what I hear, these kind of changes will arrive with Android 5.0.