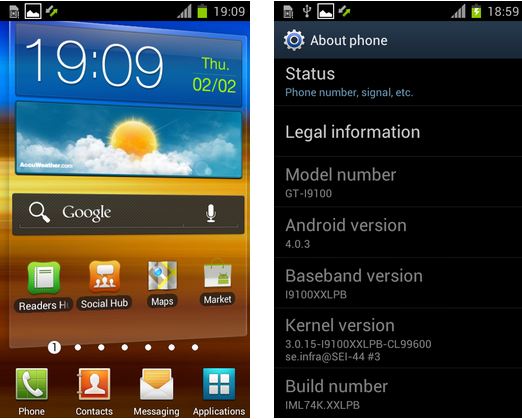 It looks like Samsung is very close to updating the Galaxy S 2 to Android 4.0, because these leaked official ROM's are working better and better. Just like we originally assumed, even the Galaxy S 2 will not have either stock ICS or a Touchwiz that looks a lot more like the stock version. Instead what we're seeing is an Android 4.0 look that has almost completely disappeared behind Samsung's Touchwiz 4.0 skin.

This is most unfortunate, because at this point I actually like the look of ICS more than that of Touchwiz, even though I don't think Touchwiz 4.0 is a terrible skin, and it's certainly better than 3.0. But I still find it disappointing that they managed to hide so much of Android 4.0's look under it.

This doesn't mean that Galaxy S 2 won't benefit from most of its features, though. It will still get the wonderful multi-tasking action, the action bar, the much improved browser with tabs, the camera application with its many new features and improved interface, the data monitoring feature, and so on.

Here's a hands-on video on the official ICS ROM and see for yourself how Galaxy S 2 will look like once it gets this update: