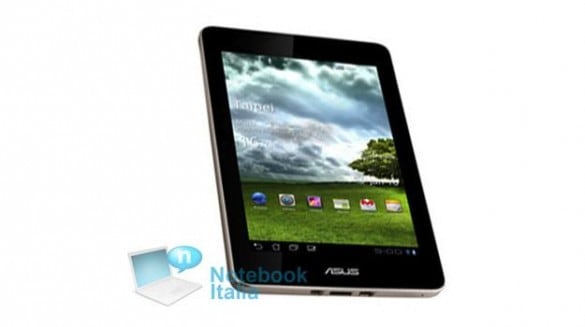 Asus has been relatively successful with Android tablets, thanks to their innovative approach of using a tablet together with a keyboard dock, and making it a laptop-like hybrid device. This approach was actually tried by Apple, too, since the beginning, by promoting a regular keyboard with the iPad.

The reason for that was that even they didn't think a tablet can be good enough for productivity. You need a real keyboard to do real work, too. Unfortunately, that idea is clearly a half-baked solution, not only because the iPad's awkward 4:3 resolution when using it in landscape mode, but also because the keyboard stays separated from the iPad. So carrying it with you would be pretty cumbersome.

On the other hand a device like the Asus Transformer Prime is very easy to carry around, just like a very slim netbook. But Asus is not stopping at the Transformer Prime, and it looks like they are getting ready to launch a 7" tablet, too. Asus is used to pushing different devices in the market to see what sells well, so this situation is no different.

A $300 would be a pretty decent price for such a tablet, although I feel that most consumers are not interested in a 7" tablet that is over $250. Asus will probably announce the official pricing at CES, so we'll know more then. It will most likely show up with Android 4.0 on it, especially if it will launch later than January. Asus is already planning Android 4.0 for the Transformer Prime for January, so chances that the MeMo will have Android 4.0, too are high.