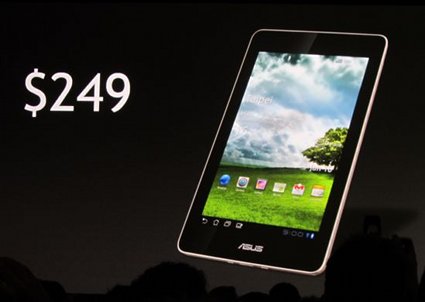 I had resisted getting a Honeycomb for a long time. It's true that I had apps on my iPad that just didn't exist for Honeycomb, but the real reason why I held out was that there just wasn't anything out there that compelled me to buy.In the middle of December I could resist no more and I decided that I was going to buy a Honeycomb tablet to hold me over until the next wave of new models hit the scene. I went to Microcenter in Cincinnati and found what would become my favorite gadget of them all: the Acer Iconia A100 7" tablet. Even with a few minor flaws in the A100, the 7" form factor is absolutely perfect for me, even though some people say I shouldn't want a device this size.

As great as the A100 is, it leaves a few things to be desired. Battery life is weak, the proprietary charging port is a drag and the 8GB model is pretty much the only thing that was available in December in my area. I could have been happy with this tablet for a long time, but there are a number of new 7" announcements from CES that have me excited about what is coming.

With a Tegra 3 processor, ICS and a $249 price tag this 7" tablet will be the next device that makes it's way into my go-bag.

I wouldn't normally get too worked up about a tablet that the manufacturer won't even talk about, but Toshiba makes pretty good stuff. The hardware specs and OS version that will ship with this tablet are unknown, but it will likely look like all the other tablets out there.

Having never held one I can't say that 7.7" would be ideal for me, but it might be.

I've resisted Samsung products because of their uncanny resemblance to other products, but this 7.7" tablet with Verizon LTE is worth a look, even if it is only running Honeycomb. I'm not crazy about a data plan for my tablet, but I'd do it if this tablet fit my needs.

Rumored Google Nexus Tablet 7"
This one hasn't been announced at CES, no one from Google is talking about it, and it might not even exist. If it does, this will likely be the 7" tablet with the best chance to attack the Kindle Fire on price and features.

If it comes, I will buy it.