Let me start off by saying that I am not only an unabashed Android fan, but have also not kept it a secret that I'm a lover of Motorola's Droids. I still have my original Droid, got my wife a Droid 2 when she took the plunge into smartphone space, and now have a couple of Droid 3s in the family as well. Furthermore, I've already put out my (very favorable) first impressions of Motorola's latest flagship phone, the Droid Razr, when it was announced in NYC last month.

So, when this phone came across my desk, I resisted the urge to jump on the bandwagon of early reviews and unboxings, and give it a proper field test. I've carried this phone around with me for close to two weeks now, and have some experience of what it's like to use it on a daily basis. While it was not my primary phone, I did have the opportunity to put it through the paces.

My verdict after field testing is as positive as it was at first sight. This is a well-designed phone, with powerful specs, and performs extremely well in every respect.

Let's look at a few points:

I can't find much fault here. It's a sleek, elegent design, that somehow fits a powerhouse of processing into a form factor that only measures 7.1 mm. The screen is 4.3 inches of Gorilla glass, and it boasts a back made of Kevlar. At its unveiling, Motorola CEO, Sanjay Jha, promised that the phone would stand "the back pocket" test, and I confess to having put that to the test, with the phone showing no signs of stress. While thin, it's not at all frail or fragile. The phone is also prepped with a water-repellent "nanocoating", which purports to protect the phone and its innards from spills. I have opted not to test this particular feature.

When the Droid Razr boots up, we're immediately greeted with a science-fictiony graphic in stunningly high resolution and clarity. I've found the display to be crystal clear and sharp, and have failed to see the questionable quality and pixelation that other reviewers have mentioned.

Again, no issues here. The dual-core, 1.2 GHz CPU is as fast as anything out there. Whether scrolling through the launcher or apps list, I experienced not even the slightest hang or hesitation. I worked the Razr pretty hard, running multiple simultaneous apps, and have not been successful in getting a program to hang, or cause a force close or a forced reboot.

It's on Verizon, so it performs pretty well in general in the NY/NJ area, where I've been carrying it around. Call quality has been clear and consistent. 4G coverage out in the suburbs has been somewhat spotty, but when I've locked in to Verizon's LTE network, I've gotten reasonably impressive results: 9 Mbps or more up and 500 kbps down, much better than could be expected on 3G. And in Manhattan, speeds were blazing: as much as 13030 down and 7769 up.

Here's a snapshot of my speed results. NOTE: The entry with 20 Mbps was on my home wifi network, and the slowest entry (lowest line) was on a 3G connection. The top 3 lines were run this afternoon in Manhattan, and show VZW LTE in all its glory. 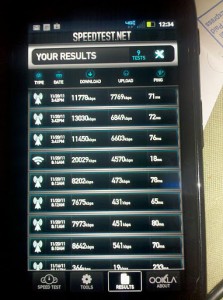 I've run GPS using Google Maps, while streaming music on Spotify in high quality, and was quite pleased with the results. Neither of the programs hiccuped a bit, even in areas where I expect to lose the data signal, or hear a pause or choppy playback in the music program. I can't be certain whether it's the 4G connectivity, or perhaps the superior processing or caching of the Razr in comparison to my aging OG Droid, but I was impressed.

The jury is still out on this one. I was somewhat surprised to see some of my journalistic colleagues proclaim the inadequacy of the battery, after only a partial day of use. With lots of connectivity running constantly, and lots of screen use, the phone, like most touchscreen phones, consumes battery quickly. But one of the more interesting preloaded apps is something Motorola calls "Smart Actions", a task automator which includes, among many possibilities, a number of advanced battery savings options. Features can be turned on and off when triggered by a variety of events such as time of day, location (yes, it knows when you're at home), or low battery level. Sanjay Jha promised a battery that would last all day, based on using Smart Actions. As this hasn't been my primary phone, I haven't really fully pushed how far this can go, and am still reserving judgement. Check out Motorola's demonstration of Smart actions here.

Probably my single biggest objection. It seems safe to assume that Motorola sacrificed this one to facilitate the thinnest of the device. But I'm suspect about how this will play out over time. Apart from battery pulls being a time honored tradition of rebooting smartphones, I have concerns about how the battery will stand the test of time, and what Droid Razr users will be experiencing a year or more into their contracts. I'll be keeping an eye on this as time goes on. Razr users: let me know how your batteries are standing the test of time. Additionally, though not for the faint of heart, apparently the battery can be removed.

This may not be a concern for many, perhaps even for the majority of consumers, but those for whom it is a concern remember Motorola telling us that they'd be unlocking bootloaders on their future phones. We're still waiting, Motorola. In the meantime, erstwhile Android hackers got this phone's bootloader cracked open before it even hit the streets.

Not a concern today, but when the Galaxy Nexus and Ice Cream Sandwich are finally released, there will be tons of applications for Near Field Communications, which allows data transfer over short distances, It's expected to be used extensively in point of sale systems, and, without NFC hardware capability, the Razr won't be able to play.

It's a winner. Definitely the best smart phone that's out there, at least for a few more days. Will this be the long-awaited upgrade for my old OG Droid? If VZW can get the Galaxy Nexus (and ICS) out before long, I'll be holding out. If you want a phone today, I don't think you can go wrong with the Droid Razr.