The US release of the long-awaited Samsung Galaxy SII was announced this week in NYC. The event took place in the Samsung Experience store, in the ¼ber-upscale mall called The Shops at Columbus Circle, on Manhattan's Upper West Side. For any Gotham-philes out there, this building formerly housed the old New York Coliseum (I attended a Boy Scout Jamboree there in 1969). 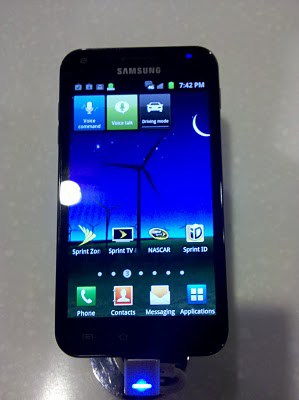 Surprisingly, after the months of anticipation, the event itself struck me as a bit anticlimactic. After all, we've known of the specs and awesome benchmarks of this device since the early spring, and even thought we were about to see its release back in April. But that, of course, was before Apple wielded its patent-infringement lawsuit, which slowed things down a bit.

So when Samsung's execs unveiled their new flagship phone, there weren't really any surprises, and there wasn't much that we hadn't already heard (and likely got very excited about) months ago. Though they gave us all the marketing points, and a walk-through of its features, I felt that there were probably thousands or millions of android geeks at large who could have put on a more inspiring presentation of this phone, even weeks ago. Gavin Kim, Samsung's VP of Consumer and Enterprise Services, provided a detailed demo of their latest Touch Wiz interface and social hub (features which most hardcore android fans would probably just as soon not have on their homescreens), and seemed very excited about simple features like the ability to group app icons into folders (doesn't he know there have been launcher apps with more advanced functionality ages ago?).

But don't get me wrong – while I found the presentation to be lackluster, the phone itself was nothing short of spectacular. If you're reading this column, you're already aware that this is probably the single most advanced piece of mobile consumer technology to date. Its specifications and features have been well-publicized, so I won't repeat the details here, but the GSII includes SuperAMOLED display and Samsung's own screaming fast dual-core Exynos processor. I got to handle a couple of these phones, and quite simply, they rock! Speed and response were incredible, with not the slightest hint of lag or laboring, even while streaming videos, of course over a 4G network. (From the Irony Dept.: when I opened YouTube on one of the demo SGSIIs, the first video to pop up was a piece touting the features of the iPhone 5, which I suspect would not have pleased either their marketing gurus or their legal department). The 8 MP camera produced the best quality photos I've seen taken by a mobile device to date, and the HDMI output, run (on stage) to an HDTV, yielded video quality which could certainly power anyone's home theatre.

Though there were demos of Galaxy SII in 3 flavors (AT&T, Sprint, and T-Mobile), there was no Verizon table at this event. Their absence is widely believed to imply that they've passed on the SGSII, expecting that it won't be worthy competition for the iPhone 5, whenever the latter is released. This of course, begs the question of what VZW is holding out for (Nexus Prime?). Anticipation of that, as yet unseen, and even more advanced, phone, may be the reason I found this event to be somewhat, well, uneventful, even amidst all the top-shelf food, beer, wine and GS2tinis (yes, really – see below). I guess I'm holding out for my Ice Cream Sandwich.

But all three, essentially identical versions of the Galaxy SII are by far the best mobile devices on the market, and you undoubtedly can't go wrong with this phone in any of its brandings.