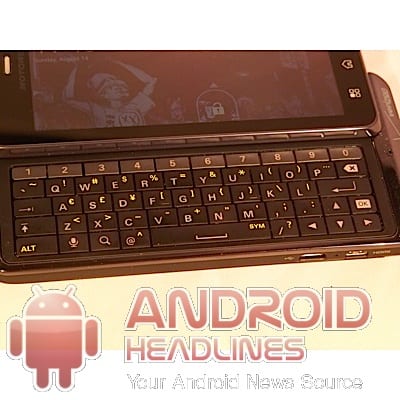 I have been excited to see this for quite some time, it is a part of the Motorola droid series and therefore something I am a fan of. Motorola used to get me really excited and quite happy, there have been some of their phones I do not agree with, and some I really like. My droid 1 is really what got me excited about this

A slide out keyboard just like the original Droid 1 and the Droid 2 as well is what this has. In fact, it keeps the same form factor too. The screen is bigger and thus the whole phone is bigger. They took away the camera button and moved the power button to the top center. There are not many drastic changes in the outer looks.

A Dual core 1 ghz processor comes with this one, so the rumors came true, many speculated dual core would grace the circuit boards of this one. I am glad it did as it provides speed. 512 MB of RAM is on the phone. It isn't quite as nice as some of the models coming out now, but it still provides speed and power. This phone also comes with a GPU, very similar to the Droid 1.

A QHD screen is on this phone it is 4 inches and gives you 540 x 960 pixels. It provides a very clear/crisp image, everything seems nicer. HD screens are the future for sure and this one has it.

1540 mAh is quite nice inside this device. It gives it the juice it needs for the power it has. You get 9.16 hours of talk and 300 hours of standby. Your results will vary, for instance, I got anywhere from 6 to 8 hours of over all usage, that includes the 3G data usage. I used it quite a bit, Google+ ate my battery UP!

You get Motorola are they still calling it that? Either way, that is what it is. A Motorola skin that adds social features. It is not as heavy as Sense from HTC I feel, however, it is not a welcome as I like stock android. Most people tend to agree with me. I must say, this version of blur, which has a base of Gingerbread, is quite a bit nicer and updated than my first taste of blur which was in the Droid X review I did a while back.

The physical keyboard has changed again, you also get the nice Motorola multitouch keyboard that they introduced with the droid x. I like the improvements to the physical keyboard, over all it feels smoother and nicer I believe. Everything seems easier to access than the Droid 2. I believe the droid 1 is still my personal favorite, I think they listened to the fans and made this keyboard closer to what the Droid 1 was

The Browsing, Camera and Video

The browsing is nice, quite nice if you find the internet button, it is kind of hidden because it looks different. They changed some of the icons for this edition of blur. It is nice though, it adds a blur kind of touch to the browser.

The camera on the rear is 8 megapixels and can record HD Video, the highest HD at 1920×1080 which is 1080p HD it does this all at 30 fps. I like that a lot about this phone, you get high quality no matter what you do. The front Camera is VGA and allows for photo capture as well as Video capture.

Calls were always nice and so was data. This device is not a 4G LTE phone, at all. It never will be. For some reason they decided not to at the last moments it seems.

I found myself liking this because of the likenesses to the Droid 1. I wasn't a fan of blur and the locked bootloader. We don't really condone it, but it is something many like. I think this could be a really nice powerful device if it were stock gingerbread. However, not sure this will happen sadly. I would recommend this phone but I personally would not get it.