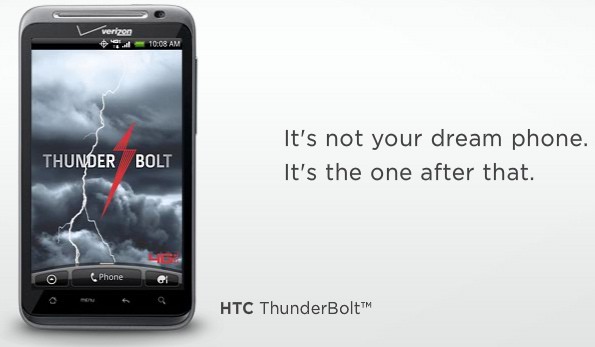 Ready for a midnight snack? According to a source of androidandme has informed them that the Verizon HTC Thunderbolt will be receiving the gingerbread update june 30th.

This is music to the ears of many thunderbolt users such as myself due to the fact that this update is said to fix many of the main issues with the device. Those pesky reboots caused by the latest bug fix update(go figure)pushed from verizon is said to be addressed. As well as the simply abismal battery ife.

And that's not all, by the looks of these leaked documents, the update is set to finally introduce skype with video functionality to the thunderbolt as well as a working My Verizon app. Adding a few of the features many users expected to be available all along. The thunderbolt has definitely had a shaky start since it's release back in March. But the addition of Gingerbread could finally give the device a bit more to offer compared to its 4G brothers the LG Revolution and Samsung DROID Charge. Meanwhile, check out these images.

Can the addition of gingerbread save the Thunderbolt? Or will it be too little too late to save what has definitely been a let down so far? Sound off in the comments below.