The Samsung Galaxy S II is a stellar performer and looks to keep its crown as the #1 selling Android device. Post have been coming from seemingly everywhere about the benchmark results on the new dual core Exynos ARMv7 SoC running at the updated 1.2Ghz. It features Android 2.3.3 Gingerbread, the new TouchWiz 4.0 UI, and a larger 4.3″ Super AMOLED Plus display. Alright enough of the talk let’s dive right in to the in-depth review. 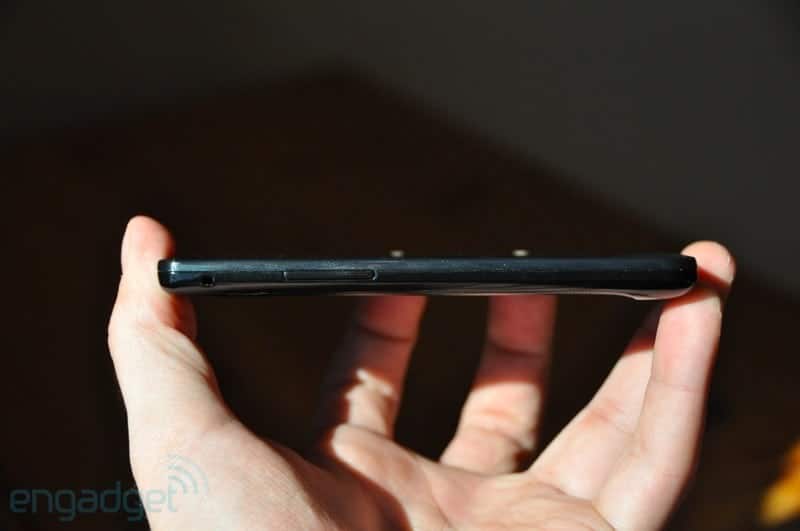 The new Galaxy S II is super thin and at 8.49mm you’d be hard pressed to find a thinner alternative. The closest competitor is the Sony Ericsson Xperia Arc and it comes in at 8.7mm. The Galaxy also feels better in the hand then the arc because of its curved edge design. The rear cover has a textured surface that will easily hold up against scratches and nicks. While build quality doesn’t appear an issue the plastic shell and feather light weight don’t give it the sturdy feel of other phones from HTC or Motorola. The Gorilla Glass front is another positive and overall the hardware included is top-notch.

One quirk with the design was the decision to put the power button along the right side of the device instead of on top like almost every other handset, and it took a little getting used to. The 3.5mm headphone jack is up top, the volume rocker is on the left, and the micro USB along bottom. It has the one large physical home button along button with capacitive touch menu and back buttons on either side. 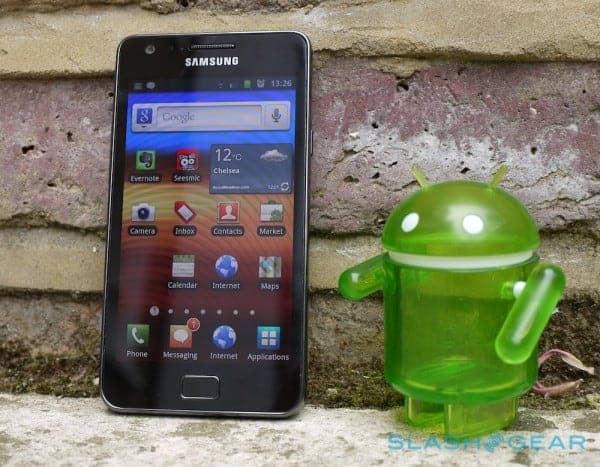 The Super AMOLED Plus display is brilliant in almost every lighting situation, despite the name being a little over the top. Its is 4.3″ and the only real complaint is the Samsung did not raise the resolution to qHD that is becoming the standard for high-end Android devices. Instead they kept the 800 x 480 resolution instead of the qHD 960 x 540 that Motorola and HTC have adopted.

Blacks are deep and rich, colors are bright and vibrant. SlashGear summed it up nicely stating, “the picture seems to sit practically on top of the phone, a bright, vividly colorful splash of eye-pleasure.” Engadget in their review also had nothing but praise for the display commenting, “Whether you’re pushing it to its limits with movie watching or just tamely browsing the web, the Super AMOLED Plus panel inside the Galaxy S II never fails to remind you that it’s simply better than almost everything else that’s out there.” Combined with great viewing angles it’s a strong competitor to the Retina display of iPhone, and 4.3″ screen real estate pushes it slight ahead. 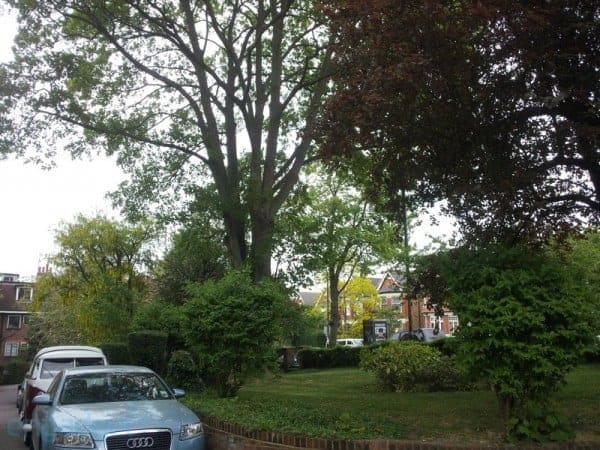 The above shot is sample picture taken with the rear camera. Samsung went with their own camera application instead of using the standard Gingerbread software. It takes great use of the camera giving accurate shots with nice color replication instead of the exaggerated pictures of the iPhone. The software has all the options that normal photographers will desire and provided shots that rival any smartphone on the market.

It records full 1080p HD video and the results are what you would expect from a camera phone. They are nothing to write home about but they are clear and more than acceptable provided you aren’t trying to capture while moving at any quick speeds. Check out the video below and be sure to set it 1080p to get the full effect.

The front facing camera is better than the VGA resolution of the iPhone and HTC Thunderbolt. It will work perfectly for video calling which is good news since Google just updated Google Talk to include mobile video calls. 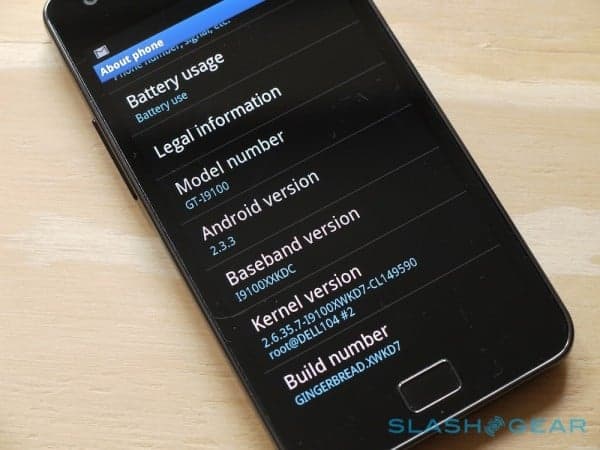 Thankfully Samsung is shipping the Galaxy S  II with the latest version of Android 2.3.3 Gingerbread. They received countless flack for the lack of an upgrade for the original Galaxy S to Android 2.2 Froyo until after Gingerbread was already released. Hopefully they have learned from that mistake as their track record isn’t something to be proud of. 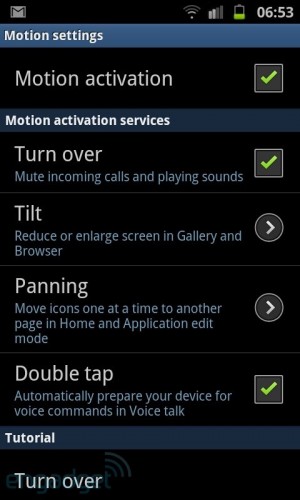 TouchWiz 4.0 comes with some additional features some of which are functional and others are kind of gimmicky, but anyone familiar with Samsung’s interface will feel right at home.  For starters Samsung oddly decided to make the left most of the 7 home screens default instead of the conventional middle screen. The lock screen has been improved with new functionality, but it is nothing compared to HTC’s new Sense on the aptly named Sensation. Missed calls and messages appear on either side of the screen and when you slide the screen to reveal them it unlocks directly into the call log or messaging app.

Samsung includes their normal software suite of Social, Music, Readers and Gaming Hubs but the real changes are in the UI elements. The contact list has been upgraded for quick communication and a swipe to the right on a contact will initiate a phone call and swipe to the left will enter into message composition.

The big features however involve navigation by motion as you can see in the shot of motion setting available.  One handy feature is the ability to flip the phone over and mute all sounds, while most phones can now mute incoming calls it also mutes any media that you have playing. Another is the tilt zoom feature that allows you to place two fingers on a photo in the gallery and pull the phone towards you to zoom in and away to zoom out.

The other notable motion feature is used when adding items to home screens. Every Android user know that it is a less than enjoyable task with the screen either not switching at all or switching to fast. When a widget or icon is selected the accelerometer senses lateral motion and changes home screen accordingly allowing for easy placement. 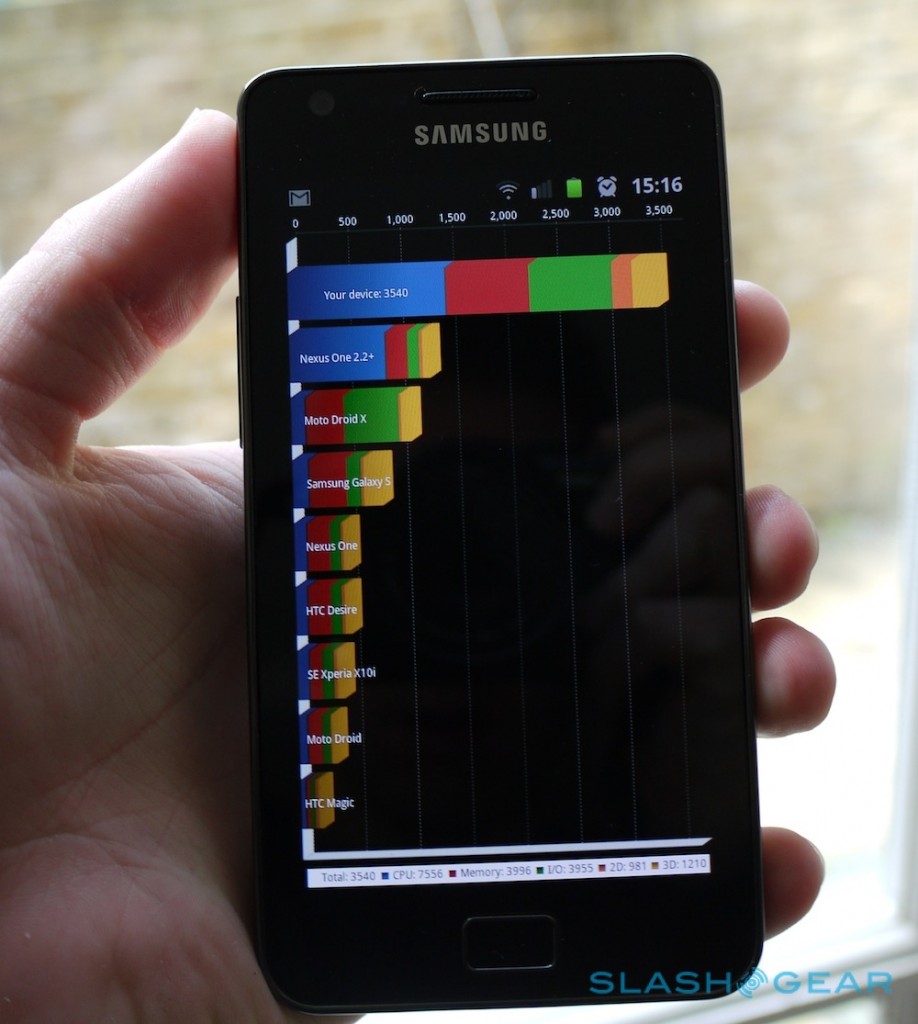 The performance on the Galaxy S II is ridiculous and is easily the current head of the pack. The LG G2x is a stellar performer, but the Galaxy S II simply outdoes it in almost all respects. With the 1.2 Ghz dual core Exynos Soc and 1GB of memory it truly is a step above the competition. Engadget said, “There’s simply never been an Android handset this smooth and this fluid in its operation.”

As you can see in the above Quadrant Advanced benchmark the score is higher than any device I have seen and this is not overclocked it’s all stock performance. SlashGear who received that score during their review went on to say, “We’ve a feeling that custom ROMs on this particular handset will simply fly.” The lower resolution of the Galaxy S II compared to the new qHD devices however should be taken into consideration as it will result in a higher score, however such a high score matched with remarkable real world performance is an accomplishment Samsung is definitely proud of. 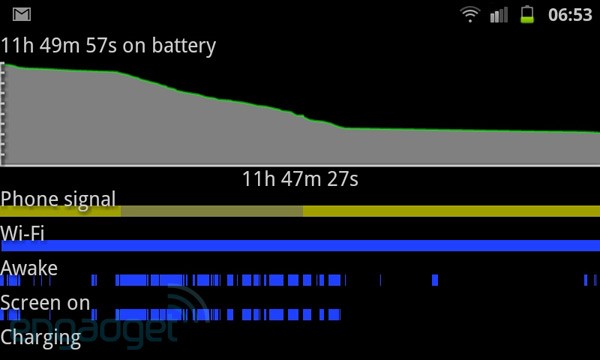 Battery life is better than you would expect on such a powerful device and you can credit that non other than the Super AMOLED Plus display. The fact that it is an OLED display means that it does not use any back lighting as a normal LED screen would. It only lights up the pixels that are needed which is the reason the blacks are so deep. It also gives the improved battery life.

Engadget was able to get over 20 hours of use and that is with the testing being done and a constant WiFi connection. It has a  1,650 mAh and SlashGear was able to get through 2 days during testing. Those are really good numbers and just add on the great impression the Galaxy S II is making. 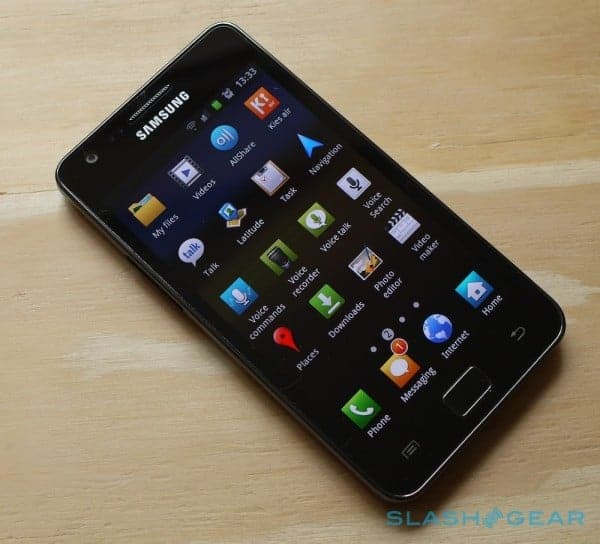 In short the Samsung Galaxy S II is the best smartphone on the market today. Its feature set, slimness, and vibrant display are all top-notch. The only device that could pose a threat to its crown is the soon to be released HTC Sensation with its qHD display and Sense 3.0 UI while it has yet to bee seen how the Qualcomm dual core 1.2 Ghz chip will perform. It also remains to be seen how Motorola will update the New Bionic, but after testing the this they are going to need to bring it all to compete.

They will however be going up against a monster. There will be two versions to choose from either one with 16GB of on board storage or 32GB of storage plus the ability to add up to a 32GB microSD card. It is already available overseas and should becoming to the U.S. soon. What do you all think about the Samsung Galaxy S II, does it have what it takes to sway you to the TouchWiz side of Android?