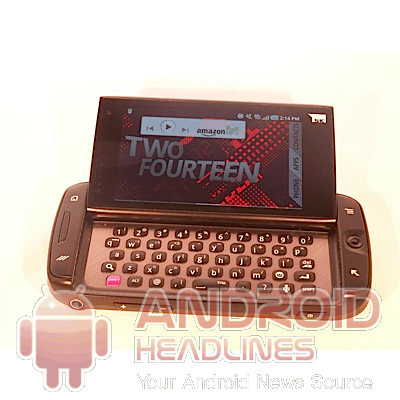 Sidekick and I go back a few years to when I was on T-Mobile. I got a sidekick 2 from someone, likely e-bay a sidekick 3 the same way, I loved both phones as they were some of my first intros into smart phones, they were also my first intro to both Matias Duarte and to Andy Rubin (b0th of former sidekick fame). Now I am on android and I see the work both of these men have done and it kind of comes full circle with an android branded sidekick made by Samsung.

What can be said here? It looks like a sidekick, everyone remembers when they were famous, Paris Hilton, Snoop Dogg, and Mark Hoppus all had them! They were everywhere and hard to miss! How do they look, they look like a sidekick! I am impressed with the redesign, it maintains how it looked and how it should look still. Those older phones were ahead of their time and I think the fact that not much has changed and they still look modern kind of proves me correct.

This phone is not just a crappy phone to fill the line up at T-Mobile, it actually is quite powerful. It comes with a Cortex A8 Hummingbird which is a 1ghz processor. It also is stocked with 512 MB RAM and  1024 MB ROM which really helps. It supports up to 32 gigs of sd and I am pretty sure mine came with 8.

I liked the screen, it doesn't appear to be anything too special 480 x 800 pixels comes on this screen, so that is pretty standard, I believe the resolution is a bit nicer because it is packed into 3.50 inches, which isn't so small, but definitely isn't huge either. It is capacitive and it isn't too touchy or sensitive.

The battery is a bit odd, it is a 1500 mAh which is rated for 6.50 hours of talk and 456 hours of standby, I am not sure if they mean that it should not be loading any background data or not in standby, but at times I got 10 or 12 of standby and maybe 8 of real good usage. I wish these phones would work for us power users. I would say that for an everyday user this phone could end up doing quite well! I think its battery would suffice for, I got 8 hours out of it and I am not sure why you would need much more than 8.

You get a modified version of android 2.2, it is Samsung so in a way it is a modified version of touchwhiz as well! It maintains a certain sidekick feel to it though. I was not confused or lost at all, it felt like home. I mentioned in the past that I was a sidekick user and it really did feel like home. I liked the little things it added, for one you have the ability to update your status on facebook and twitter from the drop down notification bar, another is the quick key they add. You can go to any app you have just been to with the quick key. It is just nice and familiar feeling

The keyboard is a dream! I like it a lot. It is easy to type on and also feels familiar. If you are hoping for a good keyboard on T-Mobile, this one is it! It is one of the best keyboards I've ever used and if you go back through my reviews, you will see that I have done a lot. My droid 1 is a close second, but this one is awesome when it comes to physical keyboards. I highlighted some things in the video that is coming in the near future.

The Browsing,  Camera and Video

Browsing is fast, it is rated to get 5.76 Mbit/s and I did. There were times when it varied from 3 to 5 but it was surely there. I enjoyed browsing, it is nearly a stock browser experience, not too much fluff or extra to bog it down. As for the cameras, they weren't as powerful as I would like to see on a next-gen device but it was still very nice. The rear is a 3mp camera and it is still very able, but just stuff we were seeing a few years ago, put 5mp on anything now! The front was merely VGA but I do not need a powerhouse when it comes to cameras in front, they are mostly for video and self shots for website avatars and just don't need to be clear and perfect.

My calls went through 100% of the time and I found no real issues with them. T-Mobile is growing larger everyday when it comes to call quality and cell towers.

I am a huge fan of this phone and my wife may even end up getting it. She likes it and she has only ever used the latter sidekick models. I found myself loving the subtle features and the old familiar design. She loved the ease of use. I don't have many negative comments here and really wish everyone would at least give it a try before buying something else. Do not over look this device this year.