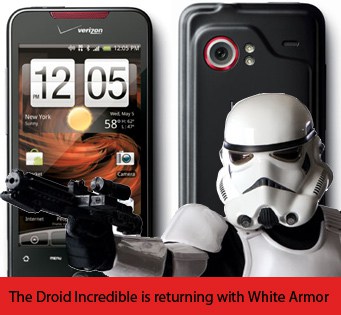 The HTC Droid Incredible 2 is one of the worst kept secrets around the Android world of late. I put it right up there with HTC's super "secret" (Pyramid) phones that we now have dozens of pictures of.

Well, now more details about this phone are coming to light and I have to say the dual band aspect of the handset is well….incredible. Droid Incredible 2 has both GSM and CDMA radios meaning it can be used in the United States and abroad. This has long been one of AT&T's talking points when comparing themselves to Verizon and Sprint especially around Verizon's launch of the iPhone, citing this as a reason to not jump ship.

There is also a new synch and connect feature which keep several email accounts and address books in the same location (this sounds a lot to me like the way web OS handles email and addresses). I'll believe the reported 3G mobile hotspot at an extra $20 for 20 gigabytes when I see it. It just doesn't sound like Verizon pricing to me. DLNA media sharing sounds real interesting. It's a fairly new technology involving sharing media between your home network and your various devices.

The specs that we know of thus far are:

So Incredible, We Can't Believe the Above Yet

For the record, take all of these features with a grain of salt. Verizon has yet to announce anything concrete on this phone. I'd you can bet on most of these specs, except for the aforementioned hotspot pricing. So if you're viewing this phone with more than passing interest and have some questions or info that I may have missed, let me know in the comments. Looks like HTC has another winner on their hands with the Droid Incredible 2.